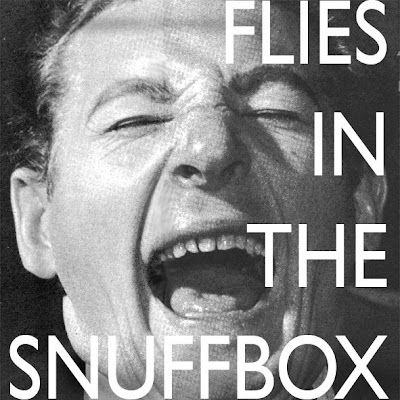 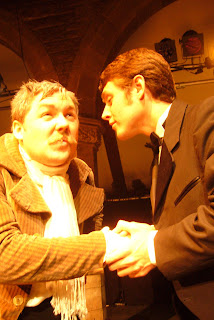 The power of prayer manifested itself in particular strength today as the first performance of Flies in the Snuffbox went brilliantly. Last night we had a doozy of a rehearsal, in which we had to keep moving rehearsal locations and eventually settled in an alleyway, fully costumed. Such is the nature of the Fringe, I guess, but I wasn’t really confident about the show as I prepared for a fitful night’s sleep. Begging Lisa and the kids to pray for us was my best recourse, and apparently it worked. We had a very smooth load-in, in which Rocket gave us an extra hour to rehearse (finally) in the space. Bless ‘em.

And then the show went well, with an enthusiastic audience – including an American Named Eric, who you’ll recall sat by us on the plane. It wasn’t a large crowd, but the average number of audience for a Fringe show is two. So we were thrilled with what we got. (Three.) (Just kidding.) I was very proud of the actors – I know how exhausted they were. But that’s what the Fringe festival is: you rehearse on the fly in cramped little hotel rooms and alleys, you shame yourself passing out fliers in costume, and then you load your show in and out of a brand new space in under two hours. It’s grueling and it’s thrilling. I want to do this every year. 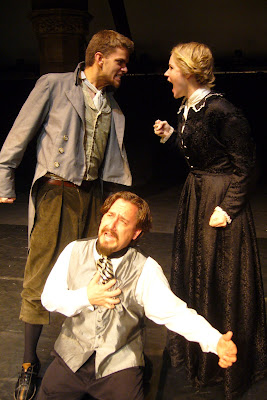 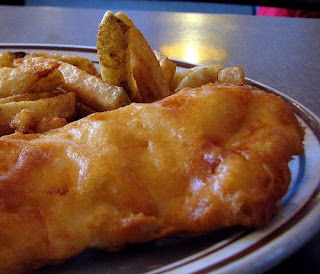 Following the show I had a great lunch with Kekoa and Carolyn. Kekoa has this thing for the Edinburgh City Café, and I understand the thing, because the halibut and chips were tasty-riffic. Again we discussed Cougars past and present, and Kekoa told us a few Fringe horror stories. Carolyn and I did impressions of people we know. Don’t worry, not you. I think. I never know who reads this. Then we went to a fantastic performance of Pericles Redux, which was 7 actors doing Shakespeare's Pericles as a movement piece. It was incredibly athletic and lyrical. And I thought it was very funny and touching in places. I’m directing Pericles right now for Young Company, so there’s a 99% chance that I’ll steal all the good bits. 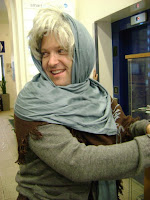 I seriously considered leaving this next bit out, but I’ll man up to it. The cast of Snuffbox donned costumes again and returned to “our” spot on the Royal Mile. Because Jaclyn had two costumes, I wore the old lady one. And a wig. And I didn’t shave. So I joined in the group, and mostly cackled like a hag and talked in an ever-changing accent. At several points I chased bystanders around and tried to pinch their bums. This was well received. I am probably in 1500 Asian photographs dressed like an old crone. Ah, well. All in the name of art. And commerce. We were bound to get a good audience. It rained on us, but we had a lot of fun. 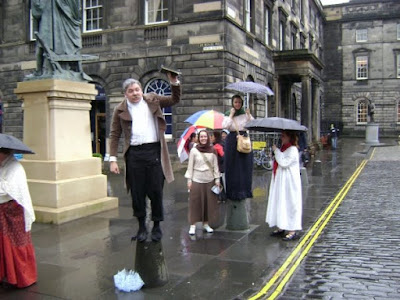 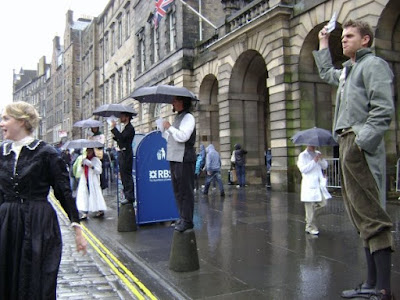 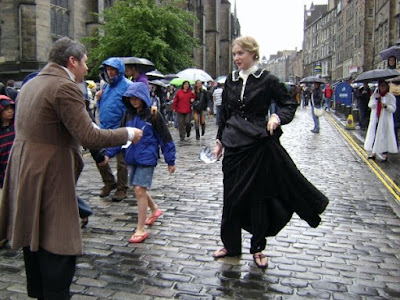 The rain didn’t let up all night, but luckily we spent the evening warm and mostly dry at the opera. We were very highbrow. Everyone dressed up and we acted like going to the opera was something we do all the time. We saw The Two Widows, which is a new Czechoslovakian opera performed in “English” by the Scottish Opera Company. The median age of the opera audience was probably 75, and we seemed to be the only audience members who laughed at the jokes. This was a comic opera, so that was encouraged. There were some ridiculous dances, people with deer heads, and an audience member who blew their nose like a goose during a pause in the second act overture. It was fun. 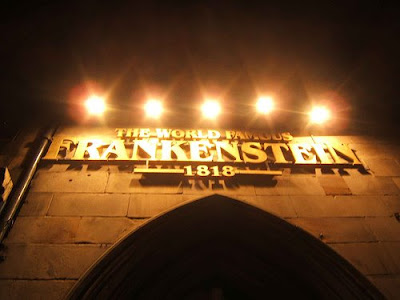 We capped the night at Frankenstein’s, which has become kind of a Edinburgh tradition. It’s sort of a ridiculous place, but it’s a nice little gathering spot if you like Frankenstein gobos, techno music, and mozzarella cheese sticks, (which they ran out of. )
Posted by topher clark at 12:29 AM