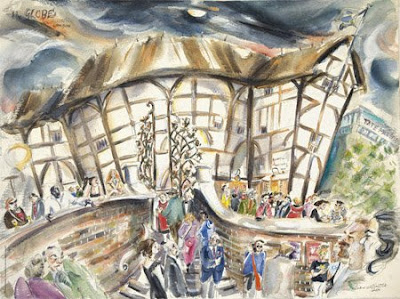 Today was a little drizzly. We're not used to it. Londoners are, but we've had nothing but generally sunny skies so far. So it was, in some ways, a welcome relief and in others, a little annoying. Of course as Mark Twain said, everyone talks about the weather, but no one does anything about it. And he's right. Pretty much we all just put on jackets. 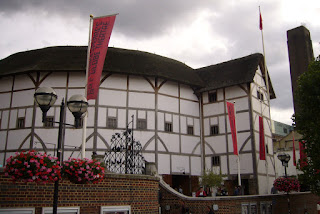 We had a great tour of the Rose, following a costume demonstration at the Globe starring Lizzie Vogeley as Ophelia. I like the Rose tour - it's fun to imagine the bear baitings and the cockfights, the courtesans and the dignitaries. It's wicked old London. I also like being around the Globe because it reminds me of one of the best times of my life. I have good memories of being on that stage, and working with actors I genuinely admired and became so close with. I have bad memories of the backstage bunks and the freezing fight classes on the icy stage, but even those memories have softened over time, and are now funny. 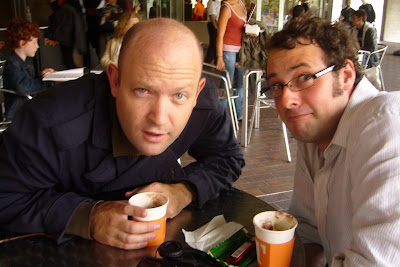 And it's great to have friends to share them with. I had lunch with my old friend Christian Emmerson today. I haven't seen Christian for years, and it was great to catch up. We talked for three hours. We had a great pub meal together, and he reminded me of many Globe and Exeter stories I had forgotten. If you know both Christian and me, chances are we discussed you at some point. There was a lot of catching up, with fries and vinegar. 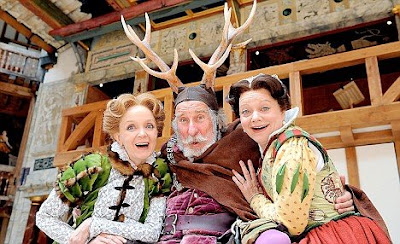 And then, back to the Globe for our first play there this season. Merry Wives of Windsor, the first play I ever directed. The Globe production was unbelievably great - I smiled through the whole thing and belly laughed throughout. There is something about the performance style at the Globe that is so genuine and audience friendly. It's light years ahead of Cedar City, and you need to come have the experience. They are not afraid of humor, sight gags, and gesture. It's fantastic. This was, I believe, the first time the play had been performed at the new Globe, though I performed a scene from it there in 2001. So I liked the idea that the last time certain lines had been spoken, and in a ridiculous French accent, they were spoken by me. 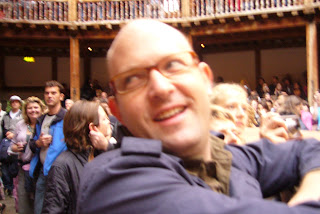 One special story. We had these fantastic standing seats in the courtyard - the set wrapped around us in a circle. It made us feel part of the action. But I had to go to the loo at intermission, and when I came back the ushers wouldn't let me back into the inner circle. They had let other patrons in and now there were too many. "But don't you know who I am?" I said, hoping they would think I was some kind of celebrity. "No," they replied. Just then I hear my name screamed from the top balcony, with waving and cheering. It's the Hegstrom-Pratts, a family from my home ward, with perfect timing. The ushers, now thinking I'm a celebrity after all, let me back in. "Looks like you've got some fans," one said. And I waved back like I was David Duchovny.
Posted by topher clark at 11:10 AM