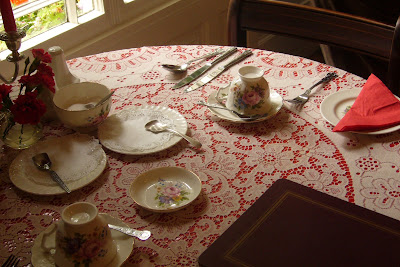 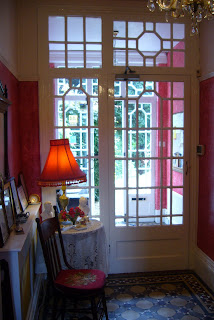 One thing you may not know about Bed and Breakfasts is that after spending the night you get a free breakfast! It’s awesome. The breakfast at the Victoria Spa was pretty fantastic – a genuine selection of meals and no set menu. The proprietress, Dreen (not a typo) was incredibly classy and friendly. She DOES NOT know anything about the internet and is not ashamed to admit it several times. Anyway, Dreen made sure everyone was comfortable and well-fed on a diet of toast, ham, tomatoes, and baked beans.

More of Shakespeare Mecca, which in the daytime is much less spectral than at night, and is probably better for seeing the sights. I have been Shakespeare's birthplace four times now, so I kind of hustle through it. But it was nice to chat with two actors who were supposed to be doing Shakespearean monologues in the garden, but were slightly bored doing it and decided to sit on a bench instead. We liked them, and they performed a scene from Taming of the Shrew, which was about one brazillion times better than the show last night. 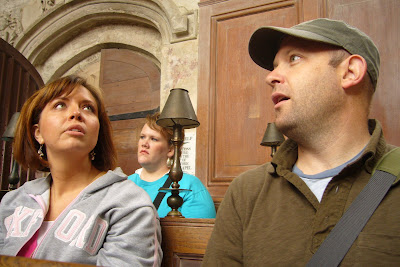 So, on to the rest of the sights. The Stratford council, with the candles and the benches. Hall’s Croft, where our tour guide became fixated on us being Mormons, and kept making references to Mormons, including “tall” Mormons and “are there more Mormons coming?” when a giant group of Russians came in. We liked him, even with his stories about John Hall’s hemorrhoids. Following this and a pastry in the garden, a jaunt to Holy Trinity Church, which is much less threatening and far more serene in the daytime. Slightly less interesting as well, and I won’t pay the 50 p to see Shakespeare’s gravesite. I’ve seen it, and I need that 50 p for a pasty at Greggs! 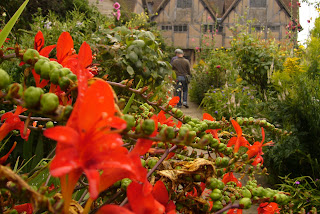 Alex, Daniel, Liz, and I did, however, take a dee-lightful boat ride on the river Avon. It’s a super touristy thing to do, but when the sun is out and the river is gently flowing and the weeping willows are, um, weeping – it’s worth the 7 pounds per boat. There were many laughs, because no one could really steer this boat. And giant boats almost killed us several times. And once I was scared of some marshes. 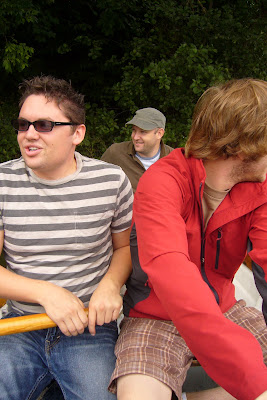 Next thing we knew we were back on the road, headed for Warwick Castle. I was not doing Warwick castle today. I mean, I went in and everything, but I can’t force myself into those wax museums. So I found some new attractions. I read my Dominic Dromgoole book up on the lookout, and took in my favorite view in all of England. Also, I went with a few students up to the ramparts, and even wandered down to the Trebuchet show at 4:30. It’s always mildly disappointing, this Trebuchet, but you have to do it. While there, I ran into Eric Davis, who I grew up with, and his family. It’s always a little strange to randomly see people from home, but it happens a lot more than you would expect. 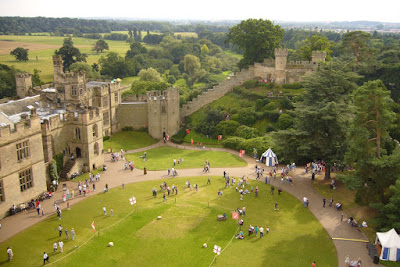 Our ride home was fun, and not just because we stopped at Burger King. We also played ipod karaoke, which is where you put on an ipod, blast it, and then sing a song out loud in front of everyone. It’s hilarious. You hear the music, but no one else can. And so you sing a really loud solo a’capella. Get it? It’s funny. We took turns. My songs were American Boy, by Estelle (but only the Kanye West rap part, which I know by heart) and When I Get You Alone, by Thicke. Sadly, our ipod karaoke was eventually drowned out by Jason, our coach driver, who played a James Blunt CD on eternal rotation and kept slowly increasing the volume.

Once back in London we dozed for a bit, but then headed down for a midnight Macbeth! You don’t always get midnight Macbeth’s, especially Polish ones where the witches are on seven-foot stilts and there’s a dynamic motorcycle chase scene in the third act. Experimental, definitely. But in terms of art and live theatre, pretty exhilarating. 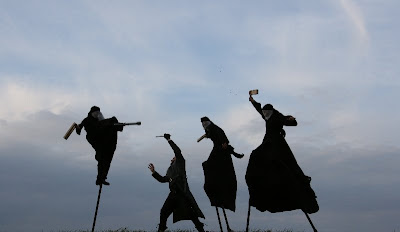