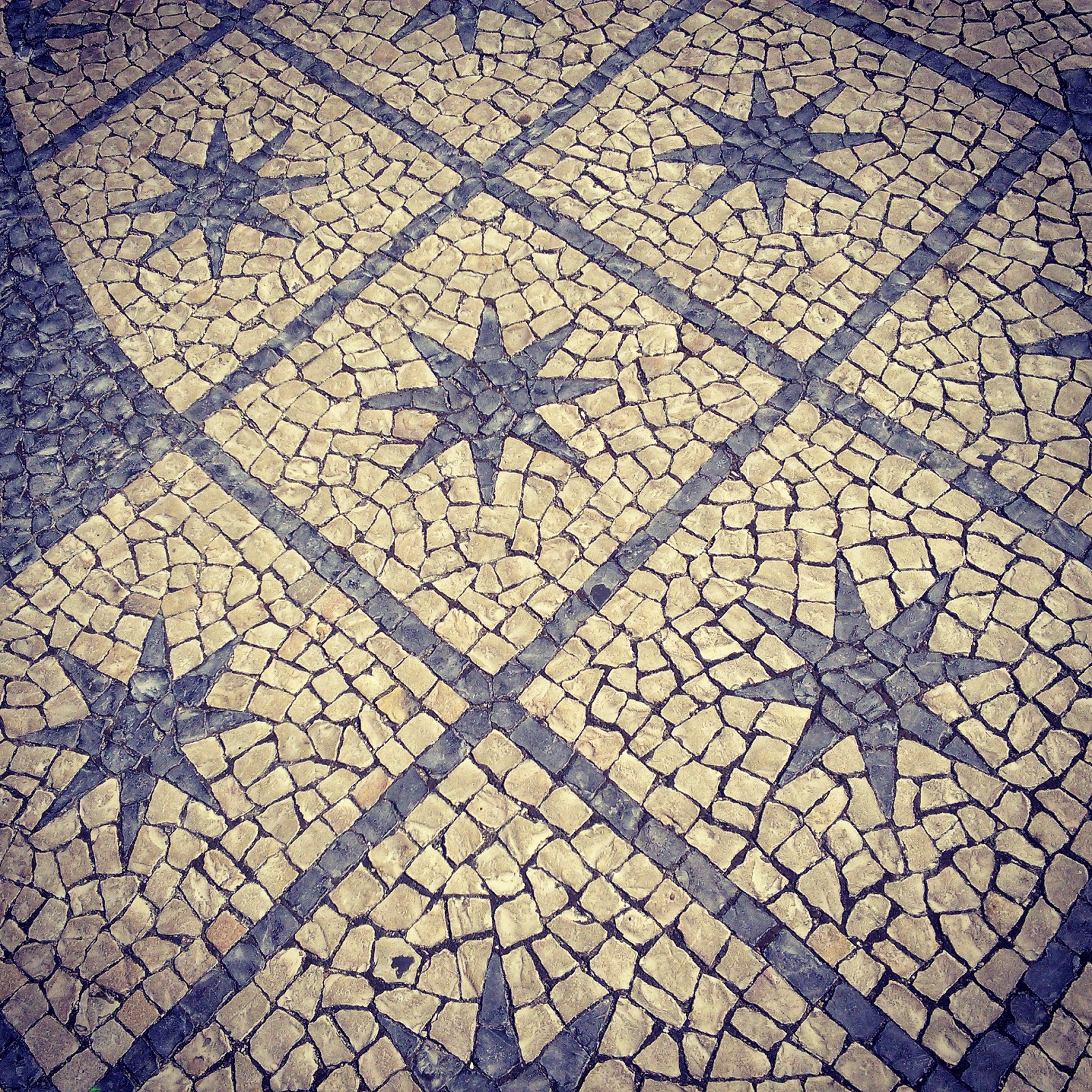 Day two in Lisbon, and today we stuck a little closer to home. Our rental car was one day only, which was enough time to see the mountains and the beach. Today we used the ole metro, which is fine by me. We also used some streetcars and some buses. More on that in a sec. 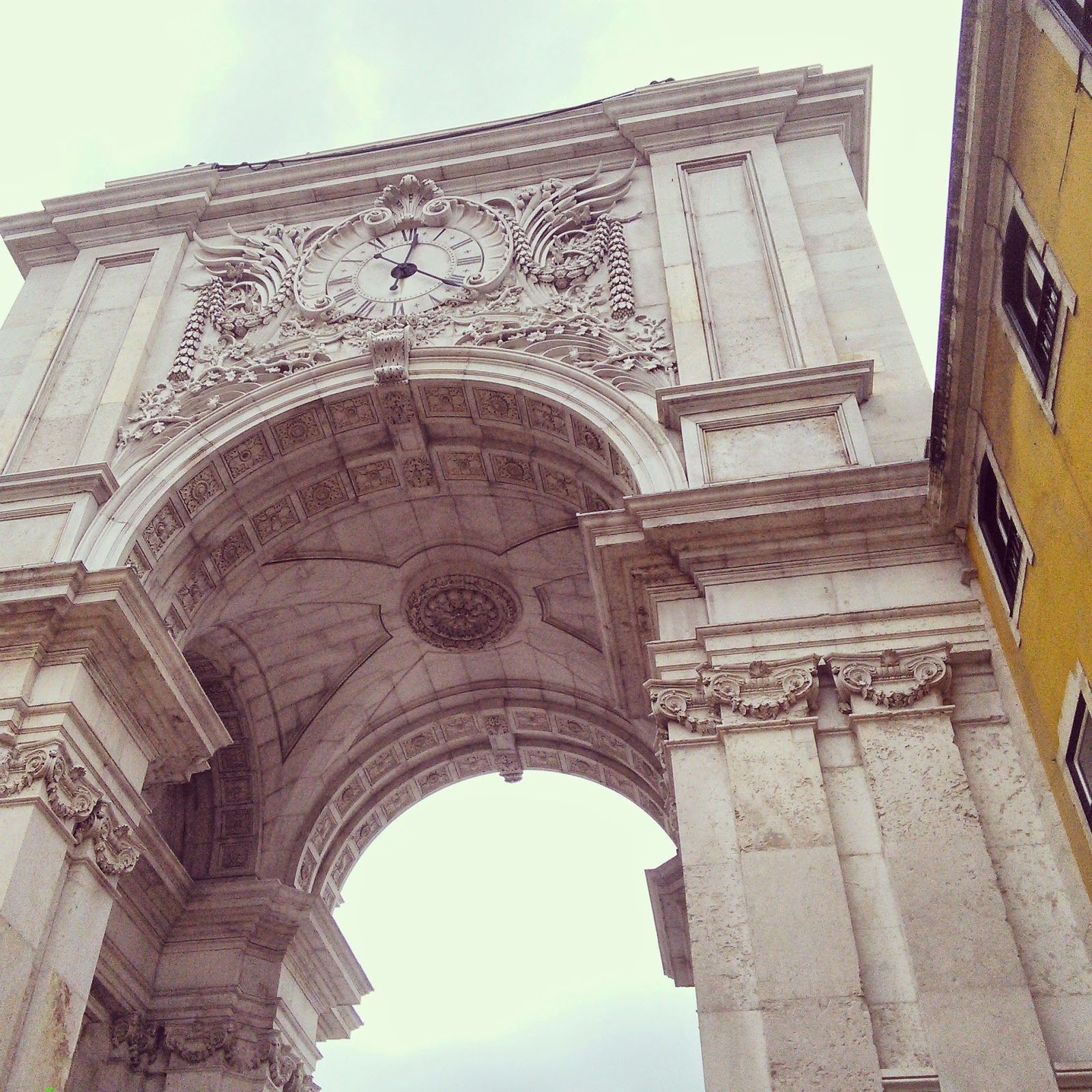 In order to catch the bus to our intended destination, the Mosteiros dos Jeronimos, we needed to head to an area called Baixa. It's sort of the old town. There was a massive earthquake in Lisbon in 1755, and Baixa was levelled. Tens of thousands of people died. They rebuilt the streets in a linear way, not unlike the Brigham Young method, and the streets are now grand esplanades of shops and pedestrian plazas. 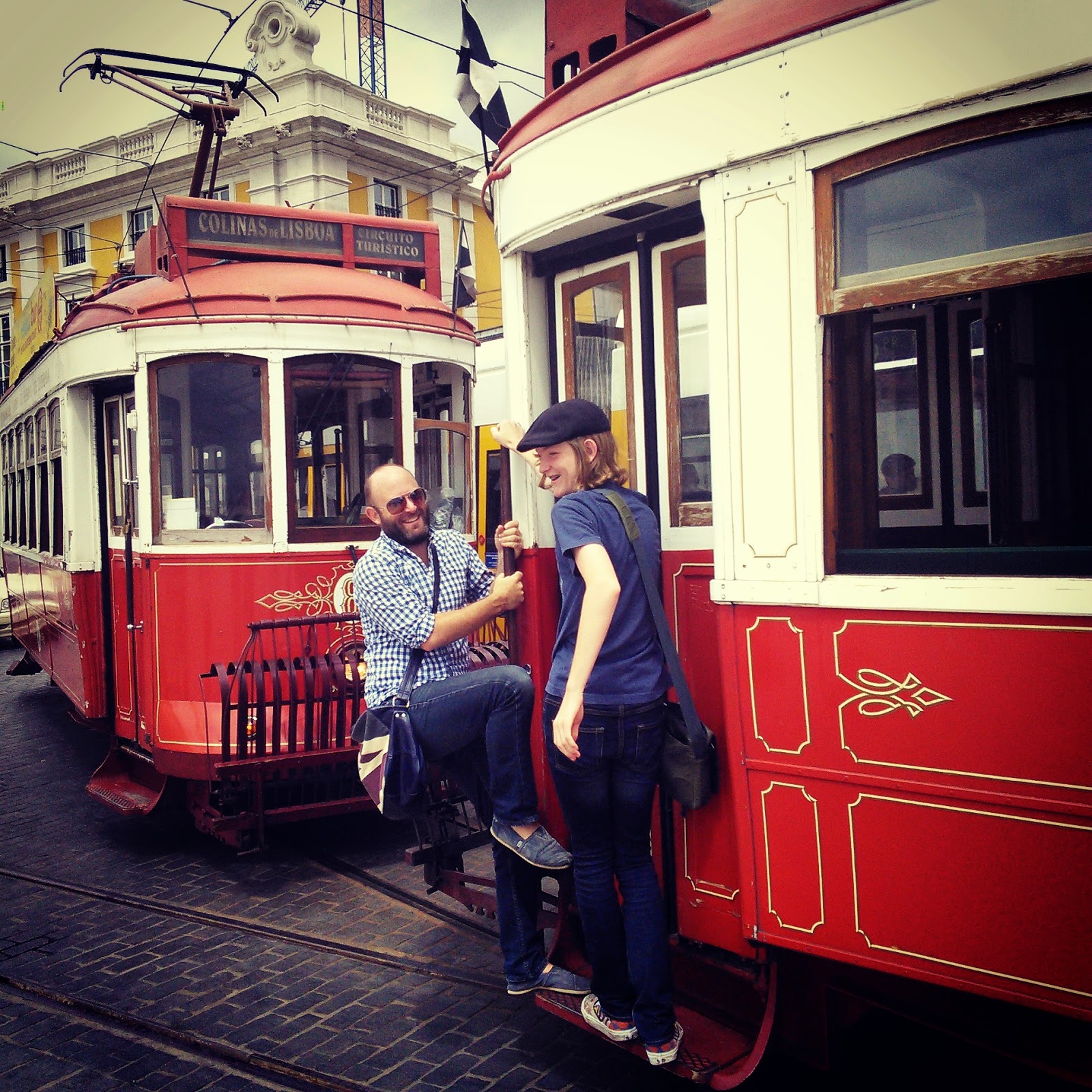 Dale and Valerie were trying to get us to the Belem, on the other side of town, but the lines for buses were long and we tried to outsmart the public transportation. And I think we did a good job of it. Actually, they did a good job of it. Miles and I just followed like droopy little dogs, happy to take pictures of stuff and make bad puns. At one point we got on a streetcar, rode it for about a block, and then were booted off by the conductor. I was just in the process of buying my ticket to ride it - dropping my coins into the machine. He kept shouting at me to get off the streetcar. Then he'd punch the buttons on the ticket machine and all my money would come out. And I'd start putting it back in. I was going to buy a ticket! He was shouting at me, and Dale and Valerie were shouting at him, and the whole thing was pretty exciting. Eventually we got off, and that man probably laid down and had an aneurysm.

Instead we got on a bus, and eventually it looked like this in there: 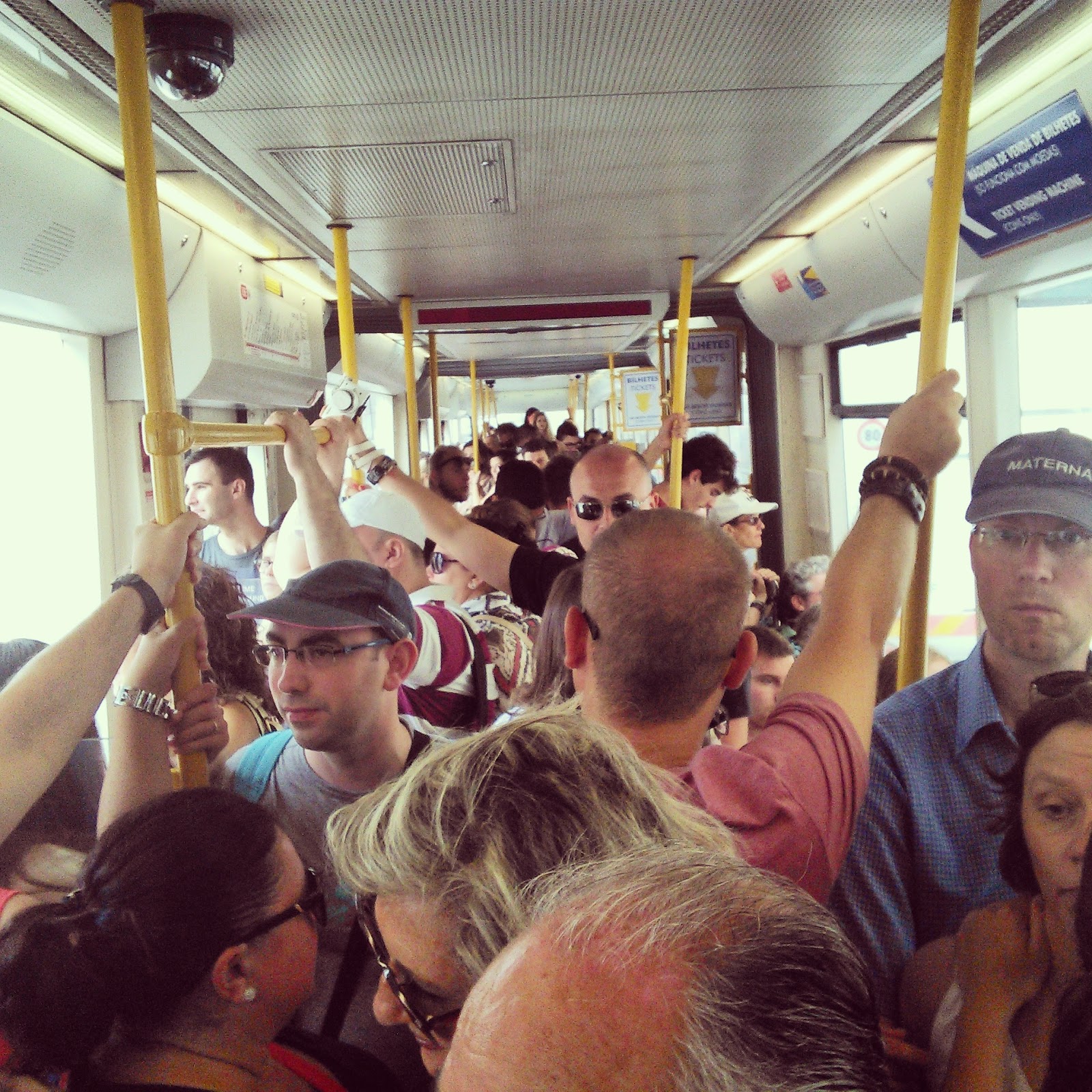 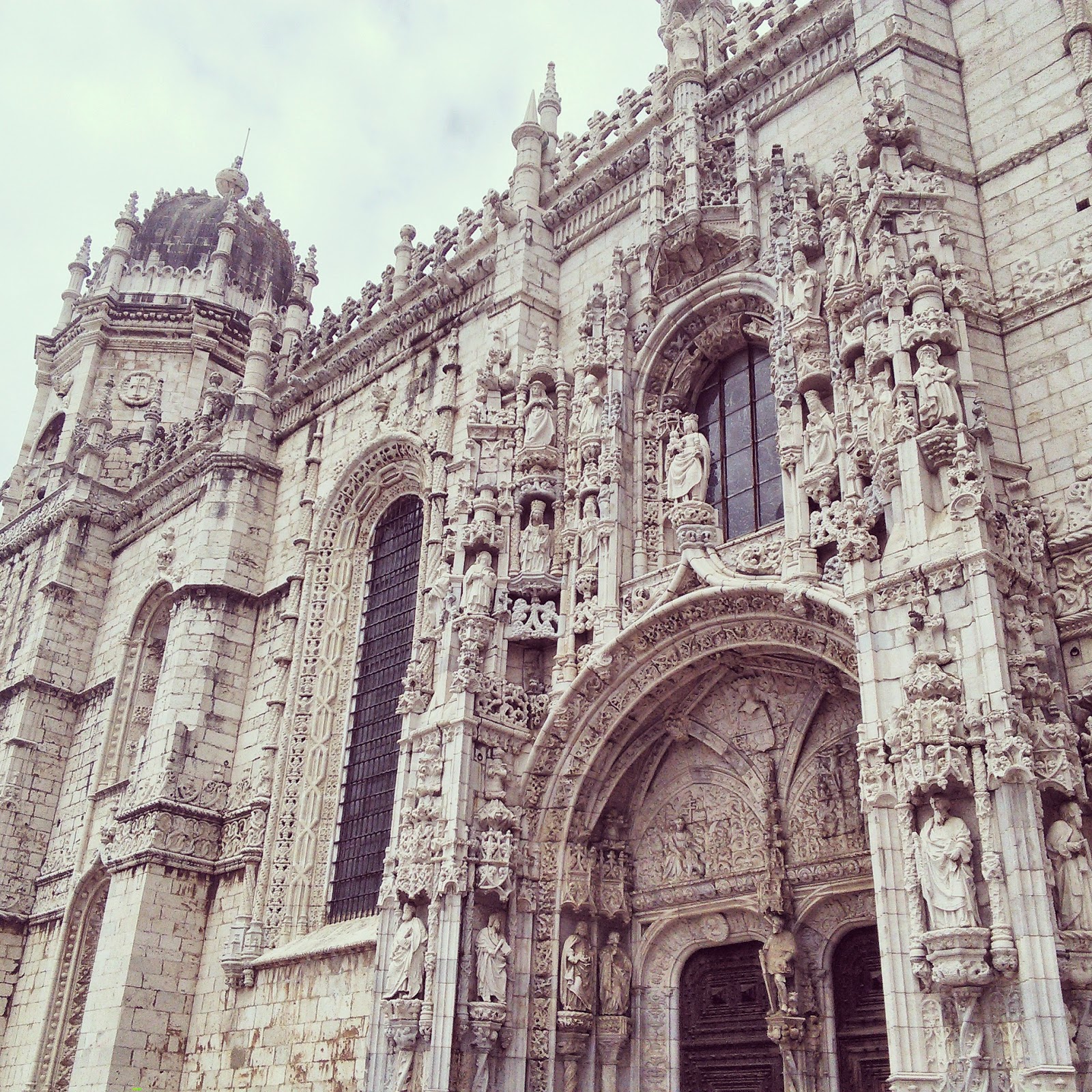 The Mosteiro dos Jeronimos (or, The Monastery of Jeronimo) was pretty impressive. Built in the 16th century to house the tombs of men who helped make Portugal awesome, it's a grand spectacle of what they call the Manueline Style - pretty epic, with lots of intricate stonework and walls shaped like ropes, exotic plants, faces, and mythical creatures.

The Nave was really tall and striking, with a fan-vaulted ceiling. 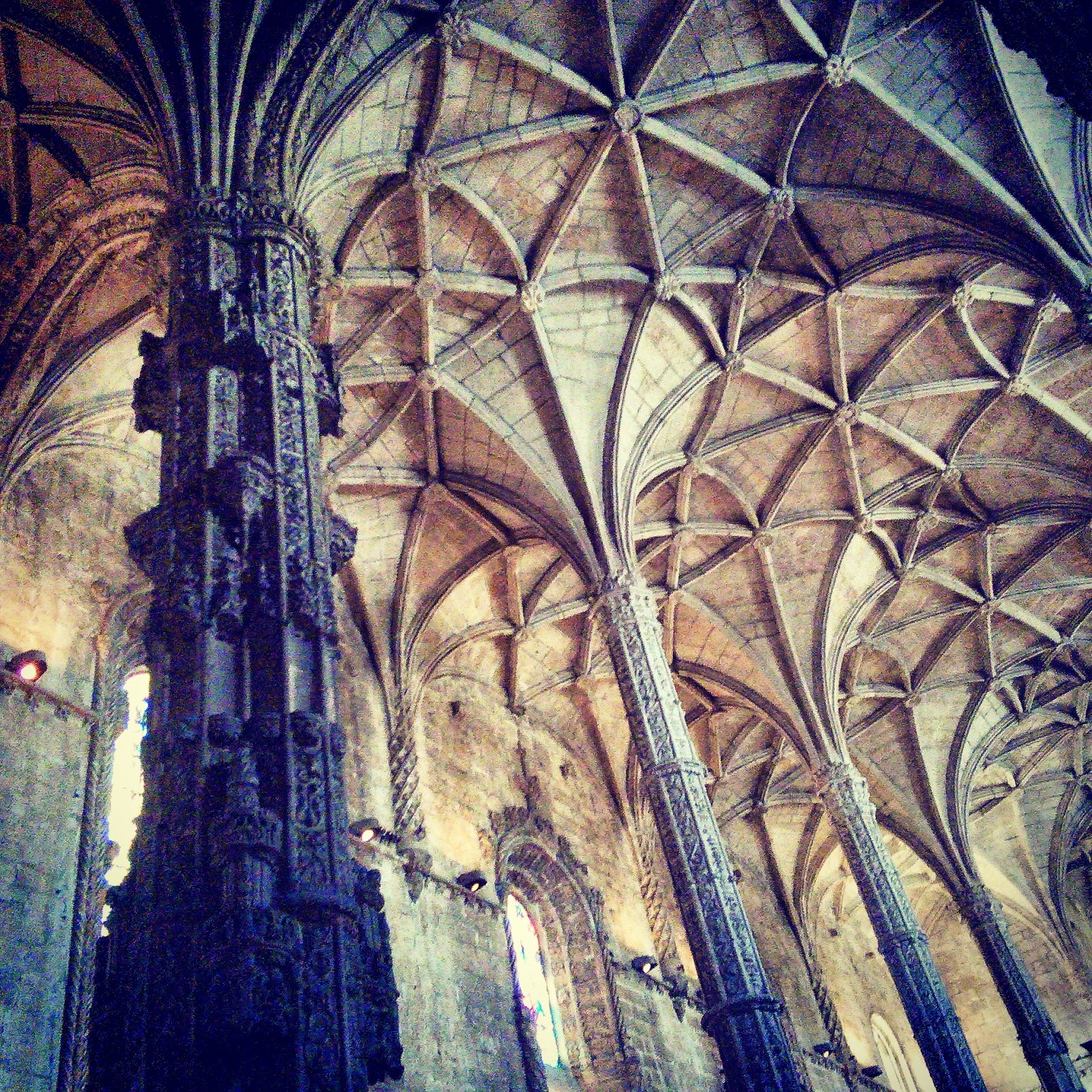 We visited the tomb of Vasco da Gama - a prolific explorer who opened Portugal up to the spices of India. 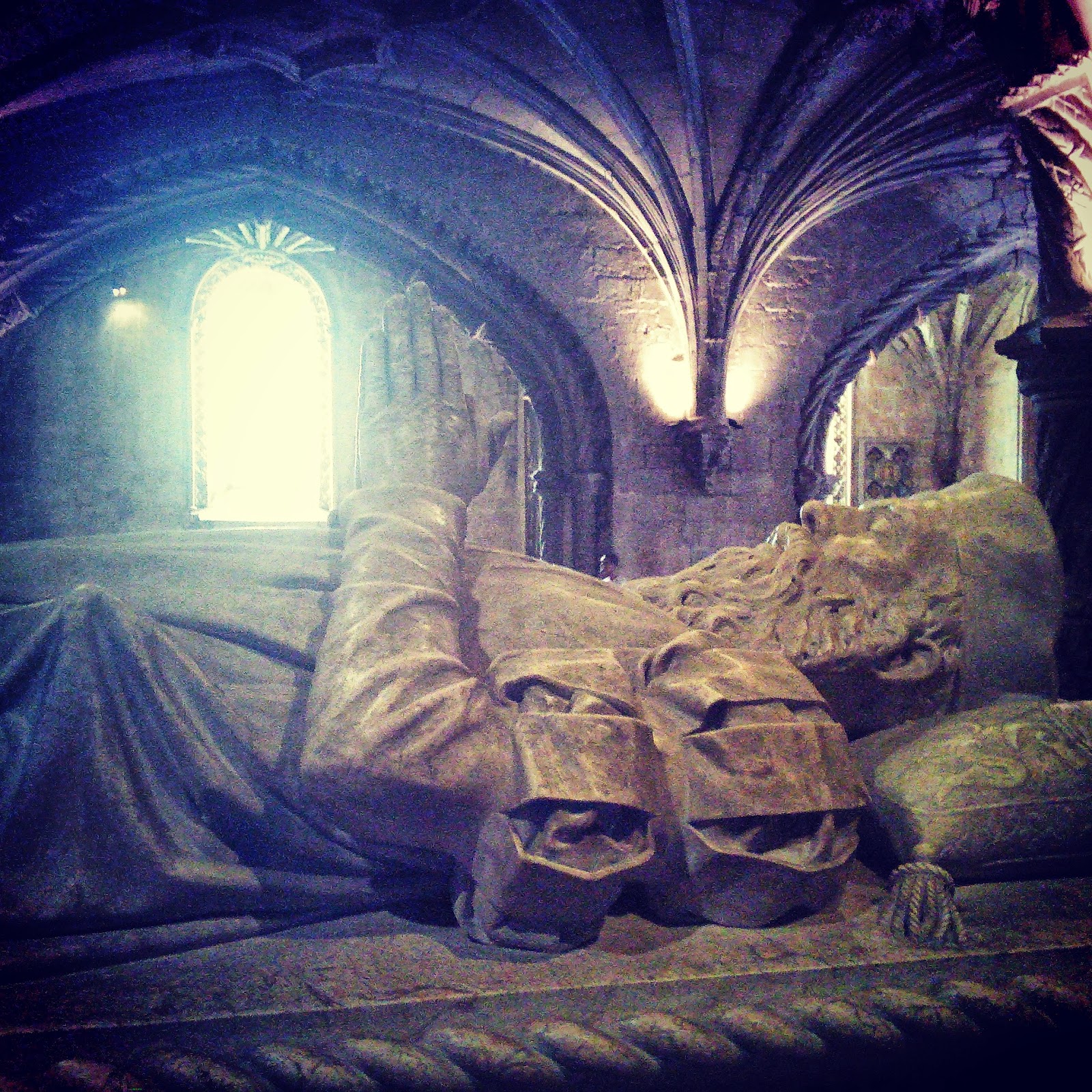 The cloister was my favorite part. So peaceful in there, and the light hit the stone beautifully. 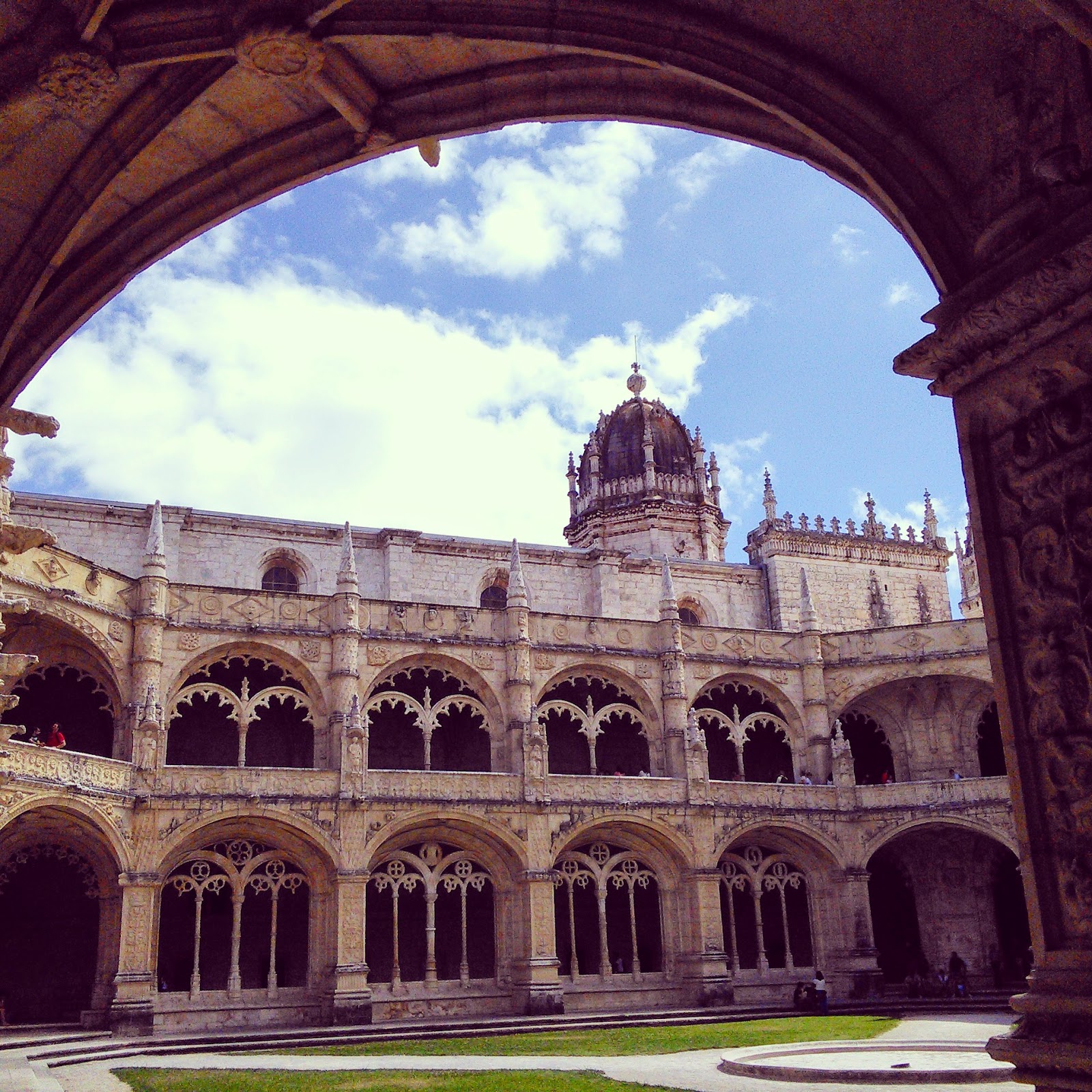 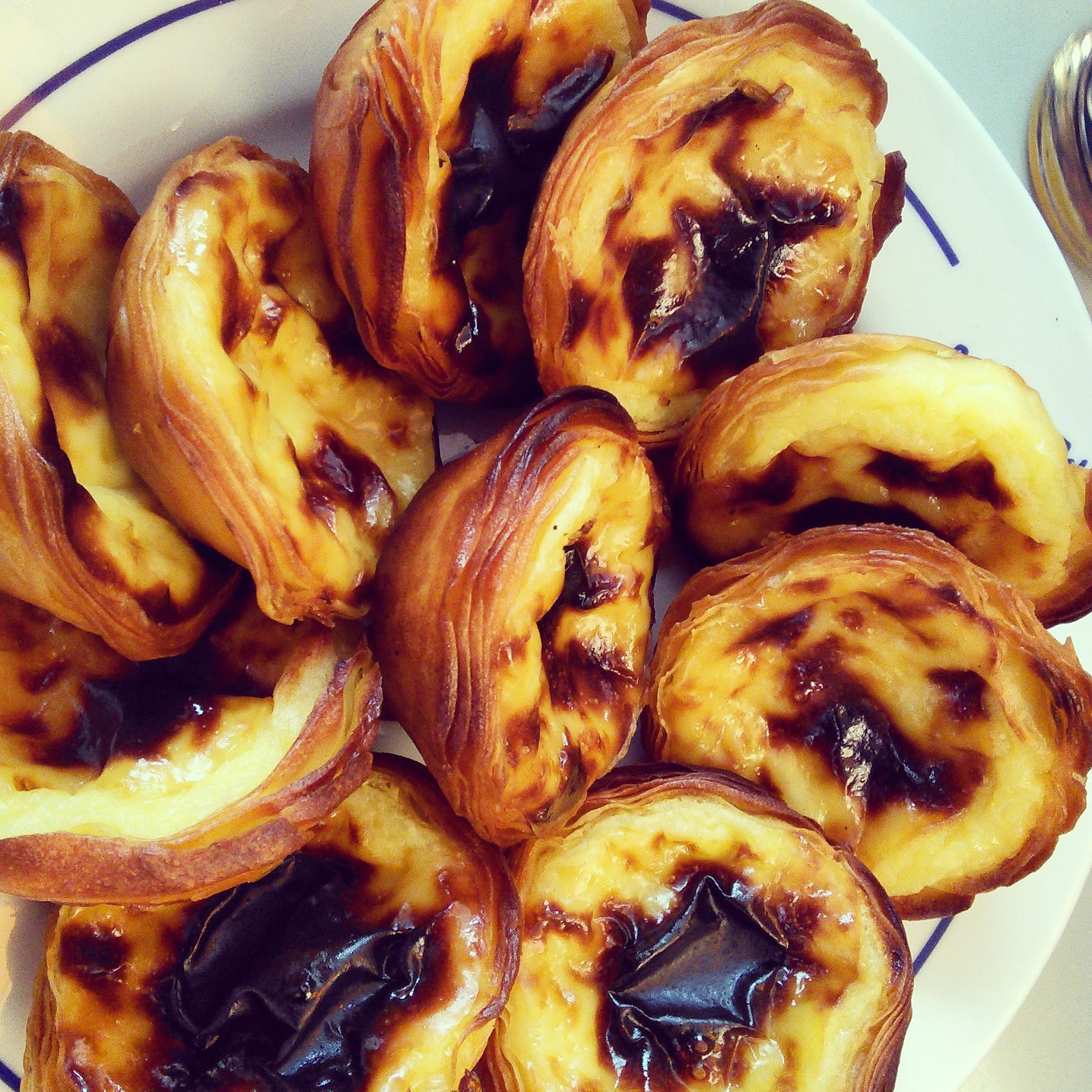 After the monastery we went to a bakery called Pasteis de Belem, which Valerie told me is the finest bakery in Portugal. Earlier, we had run across the "second finest" bakery, and I enjoyed the fact that these bakeries are actually ranked. We stayed for lunch, but the highlight, besides the beautiful blue tiled walls, were these little pastries called Nata - flaky crusts with hot custard inside. Oh, gravy. Those were little cakes of Kolob. Could not have been tastier. I ate two, felt amazing, took a selfie. This is just moments after eating two Nata. Can you sense my happiness and satisfaction? 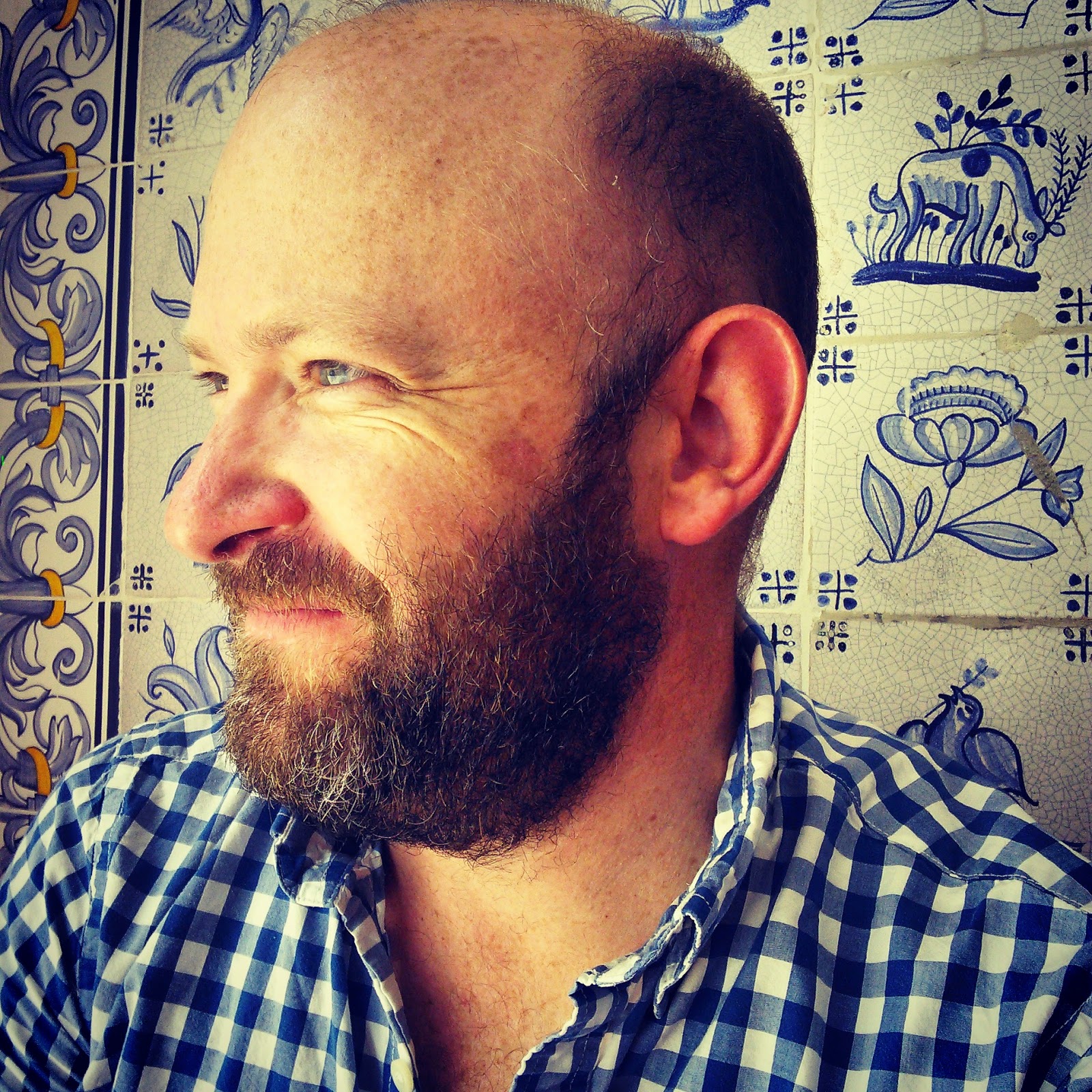 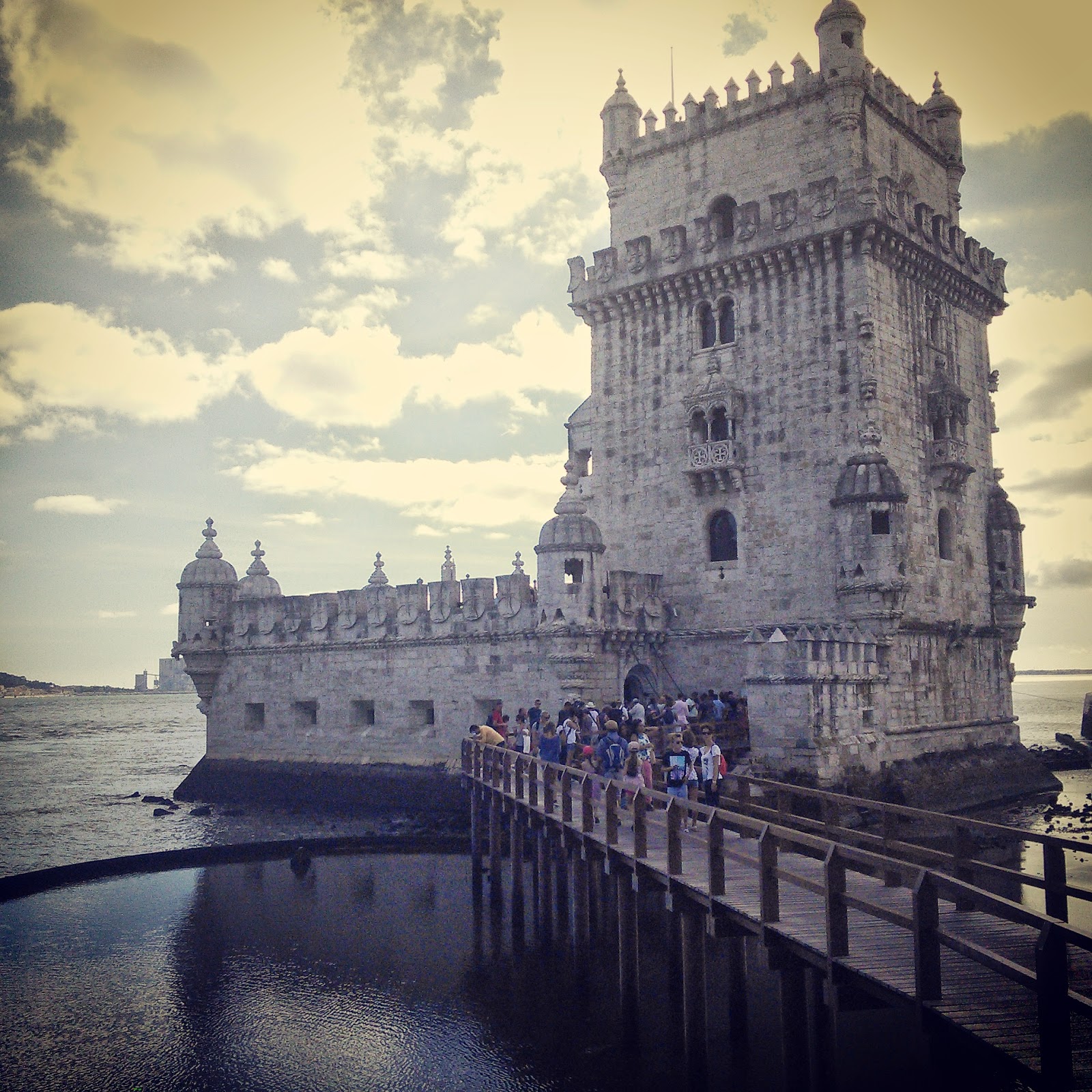 We next visited the Torre de Belem, a defensive tower from the 1500's shaped remarkably like a boot. It, too, is designed in the Manueline style, and was once an island when the river was higher. There was a dungeon that used to flood when the tide rose, drowning the haplessly chained prisoners. The exterior has intricately carved ropes, knots, shields, and a rhinoceros. That was my favorite part. My least favorite part was when I got stuck up on the watchtower and the guards wouldn't let us come down the one and only staircase. But they let plenty of people come up! So the room eventually filled with more and more people growing more and more frantic because no one could get out! It was drama in real life. But I got out eventually, basically, by shoving. You know, I did what the gypsies do! I don't know about the rest of those tourists, though. They may still be up there. Or dead. Oh well, what a beautiful place to go! 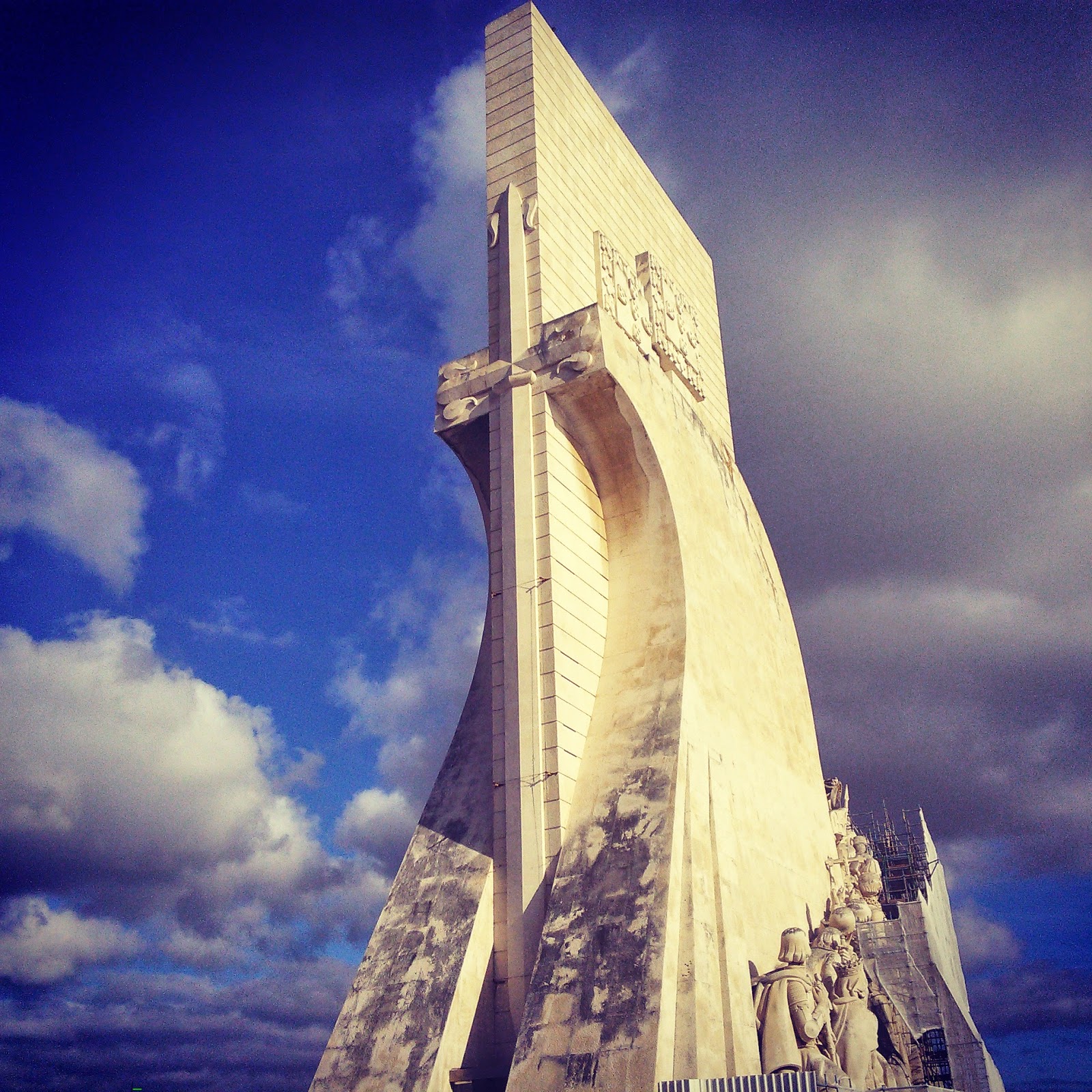 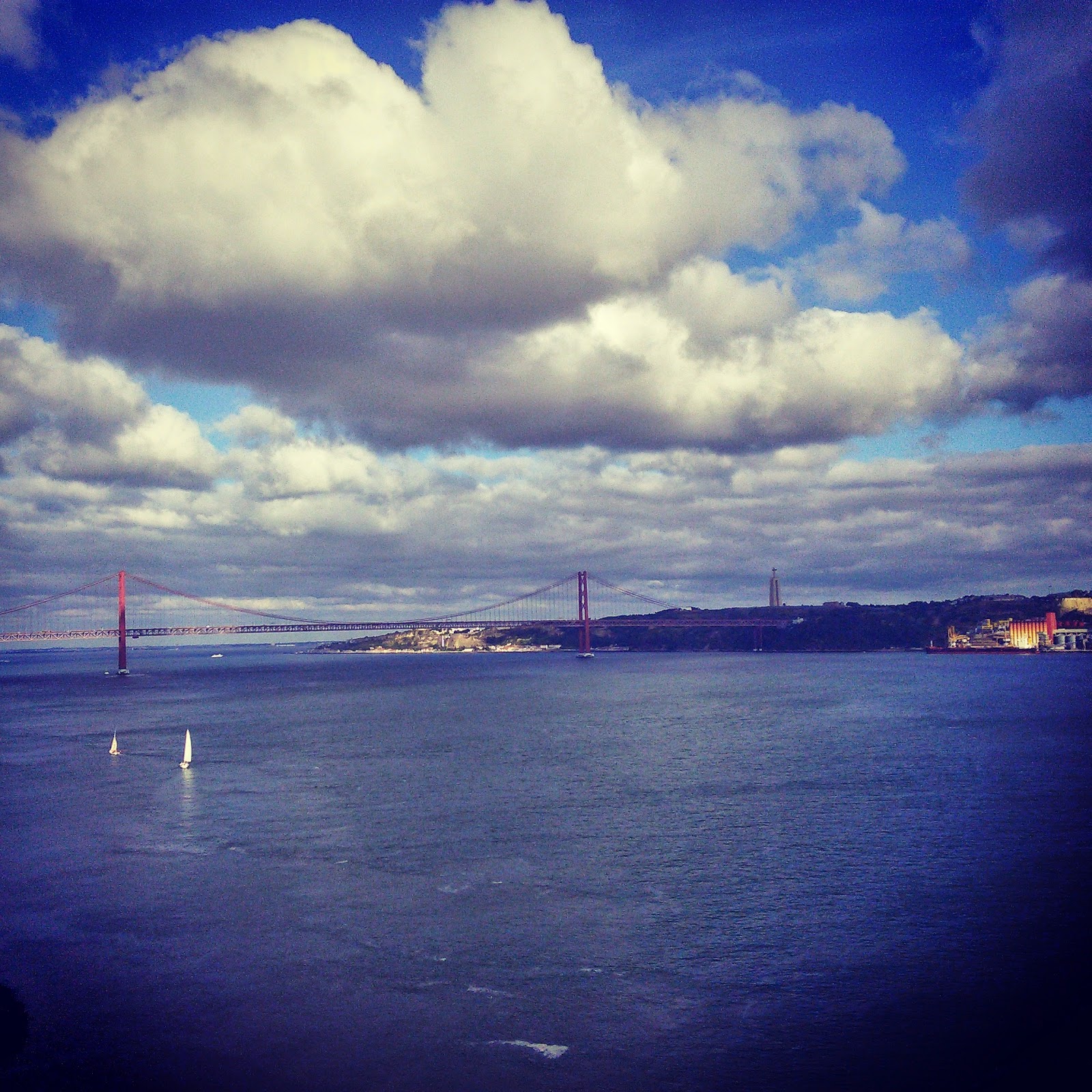 We walked along the riverbank until we saw the Padra dos Descobrimentos, which is a monument in the form of the prow of a ship. It celebrates all of the brave Portuguese navigators. We loved it chiefly because of the view from the top. The wind was blowing lightly up there, and the sun was setting, and the ocean was sparkling. And it felt great. The tiles below created a map of the world, dotted with early Portuguese settlements.

We took a bus through town, over the river, and through the woods, until we hit Joseph's favorite place: the Centro Colombo mall. It's one of the top three largest malls in Europe and it puts our little City Creek to shame. Apparently it has a roller coaster in it, but we never made it that far. We stopped at a steakhouse and then died and went to heaven. Followed by chocolate mousse. In the grand tradition of shopping mall meals, we walked around the shops afterwards. Miles and Joseph disappeared into an electronics store until, a little while later, I finally found Miles. Doing what Miles does best: 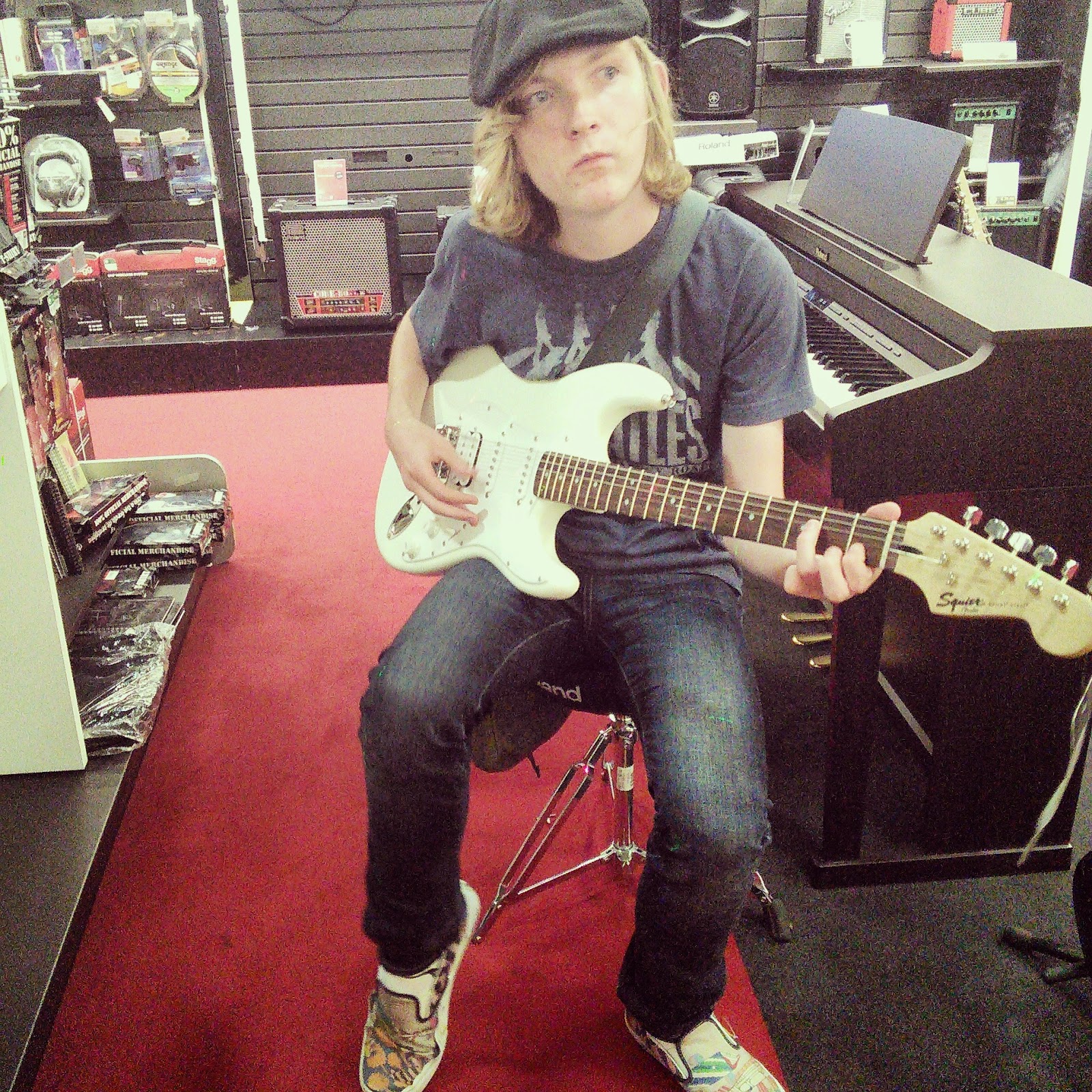