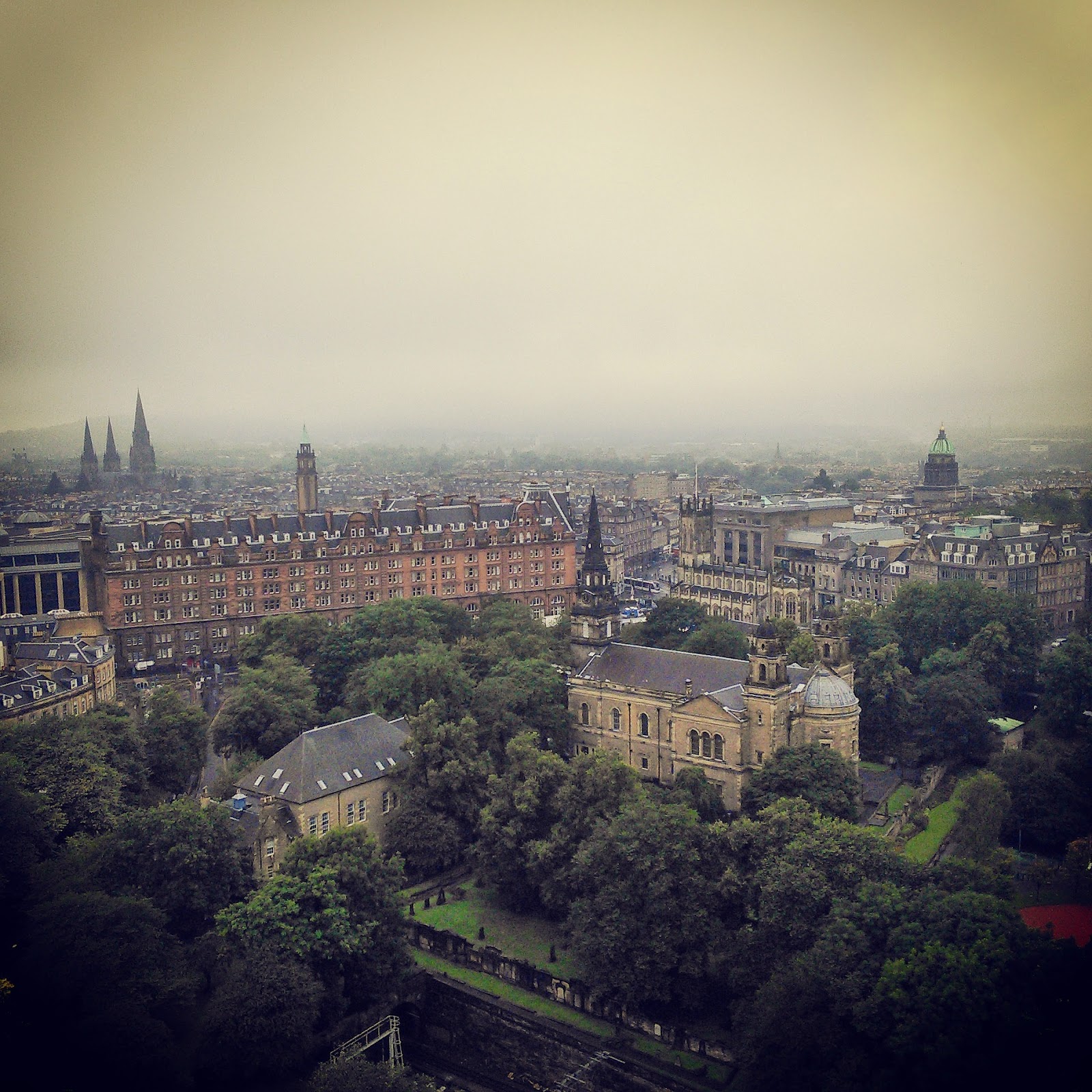 Our third, and final, day in Edinburgh rolled in with a cloud of rain. I knew we were in for it when I woke up around 6 am to hear the patter outside our hotel room window. And then, as the city woke up, the splash of the trucks and buses rolling through puddles on the street. I'm amazed we haven't had more rain, to be honest, as I always expect it in Edinburgh. So it wasn't a shock, really. The students, to my surprise, seemed excited by it. "This is the weather I was hoping for," they said. It was a nice break from the heat of London, I guess. 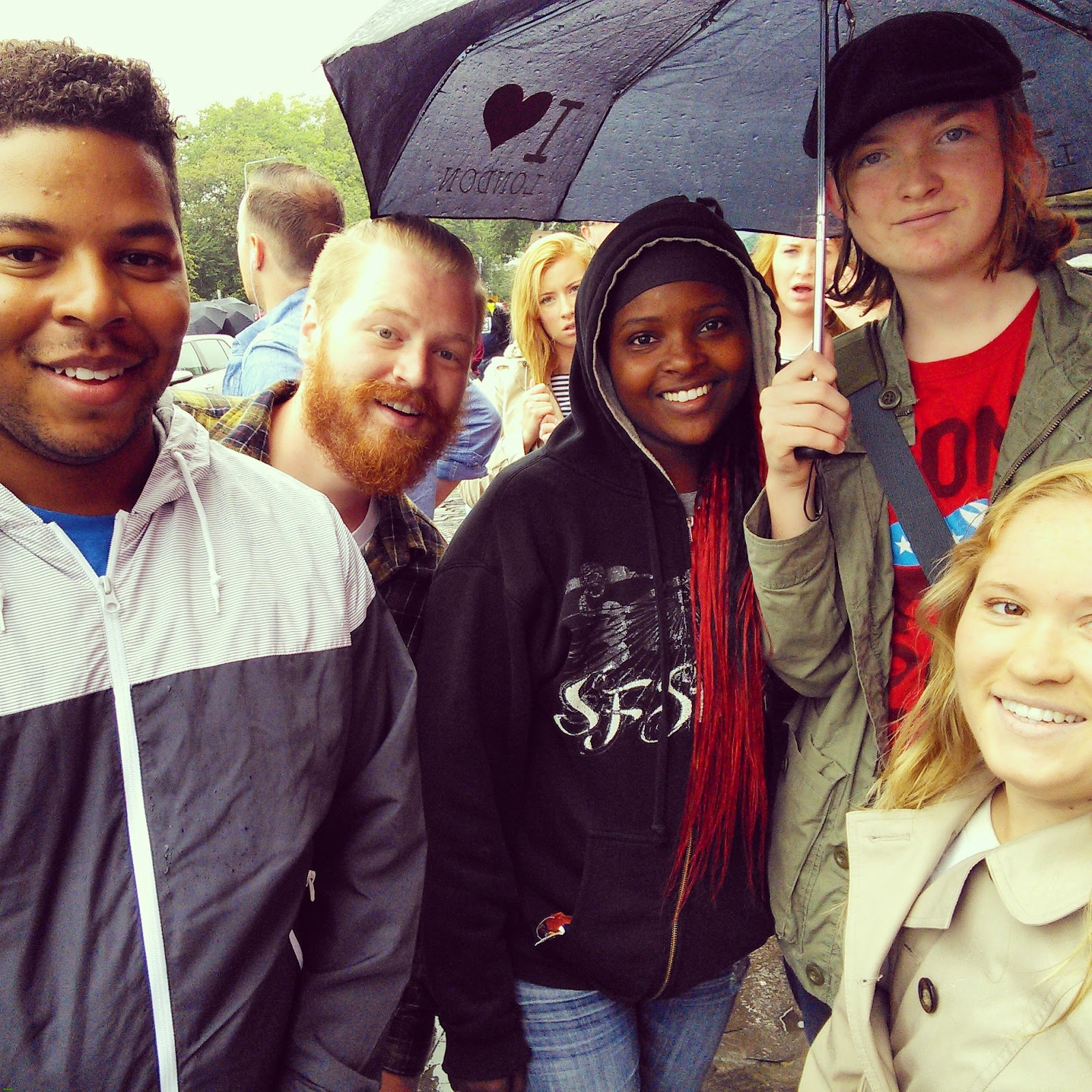 We gathered as a group and headed to Edinburgh Castle. My Tom's, despite being the most comfortable walking shoes I've ever brought to Europe, were pretty slick on the wet pavement. I slid my way up the hill. 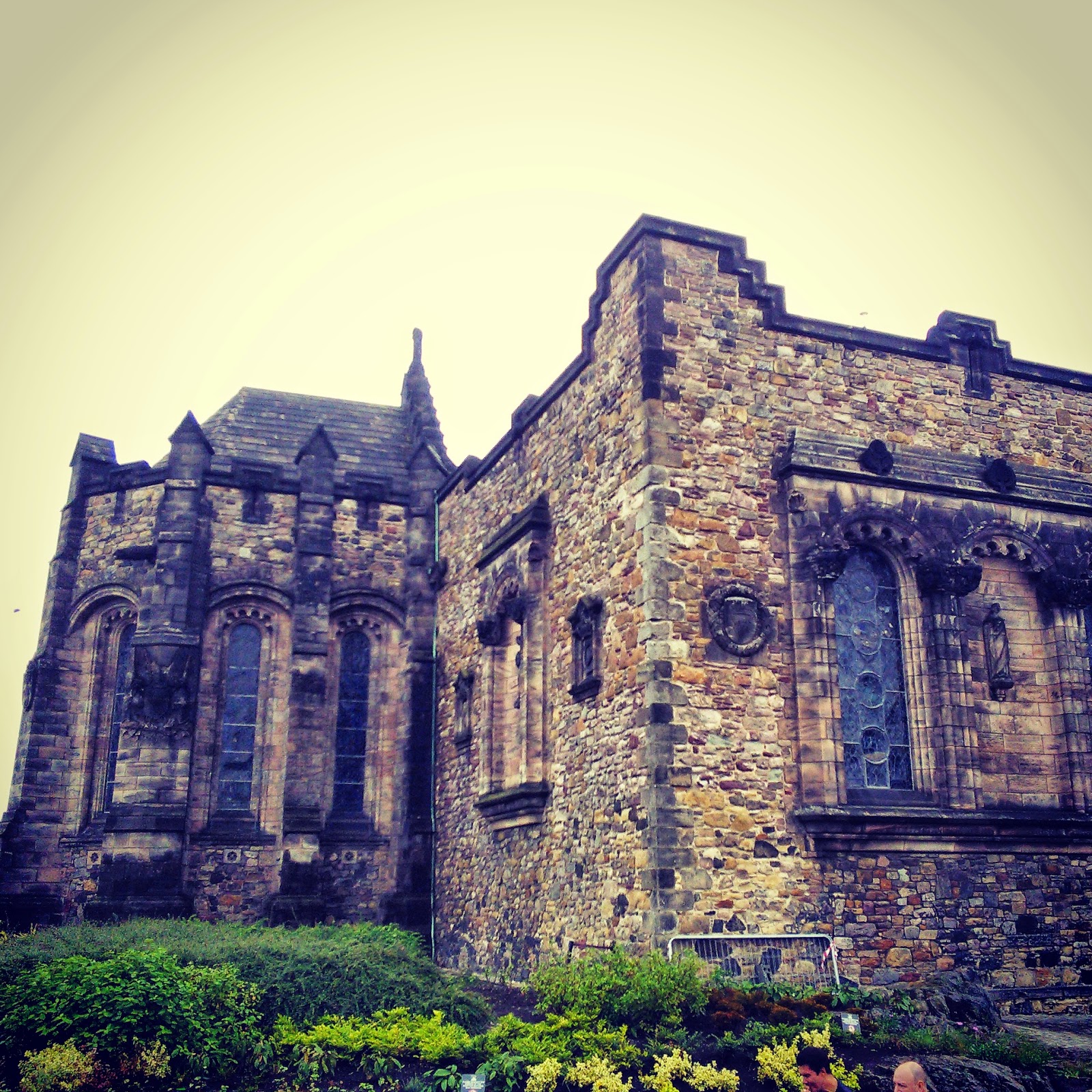 Once inside the castle, we gathered in the cafe for a little breakfast. It's pretty in there 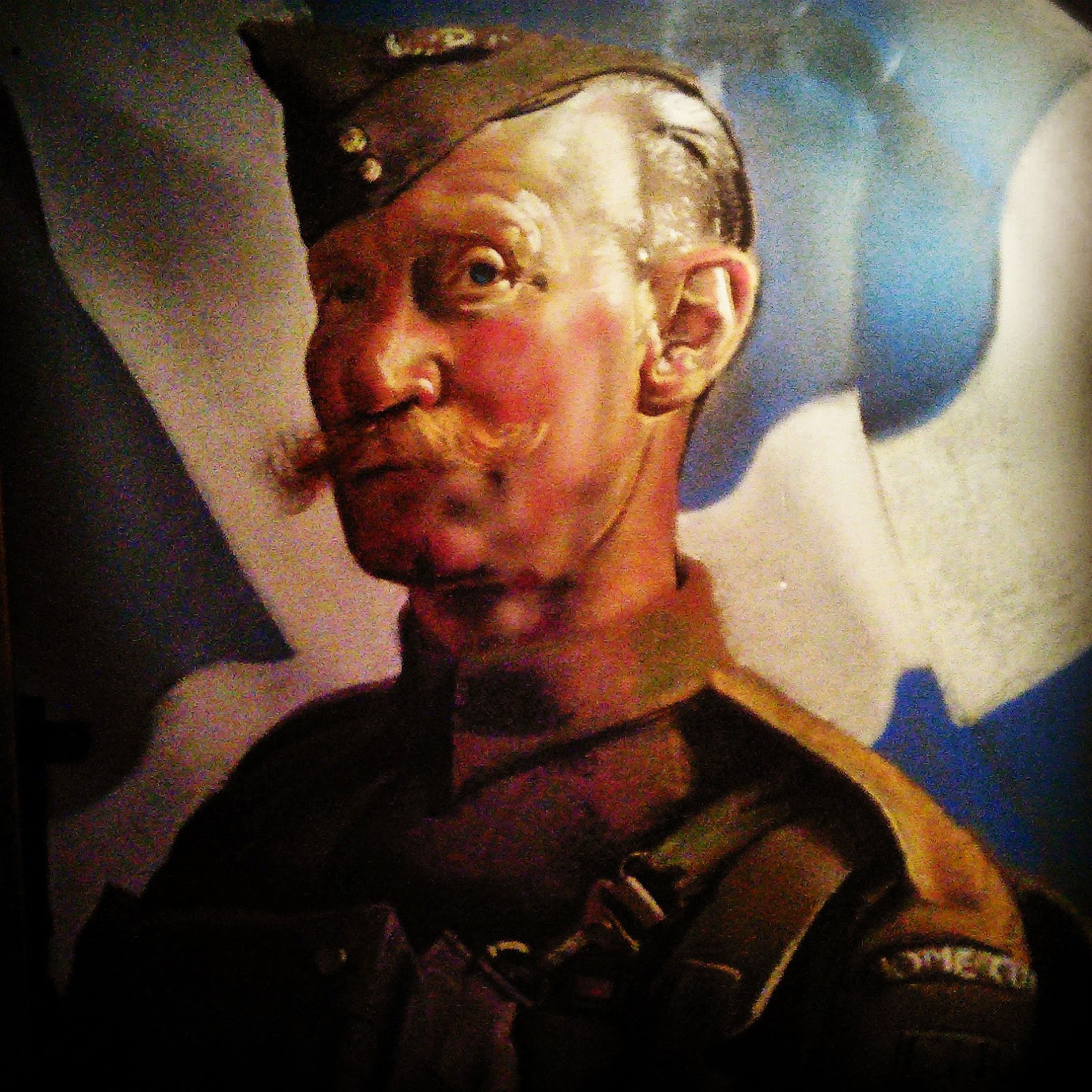 - every window looks out over the city and we got a beautiful misty view on every side. We toured the different exhibits, with special looks at the World War One rooms; this year marks the 100th anniversary of Britain's involvement in the Great War. The boys toured the castle while I waited in the courtyard and snapped some photos in the great hall. The weather had let up by now and it was just gray and hazy - maybe the perfect weather to see Edinburgh Castle in. It felt like the Mists of Avalon or something. 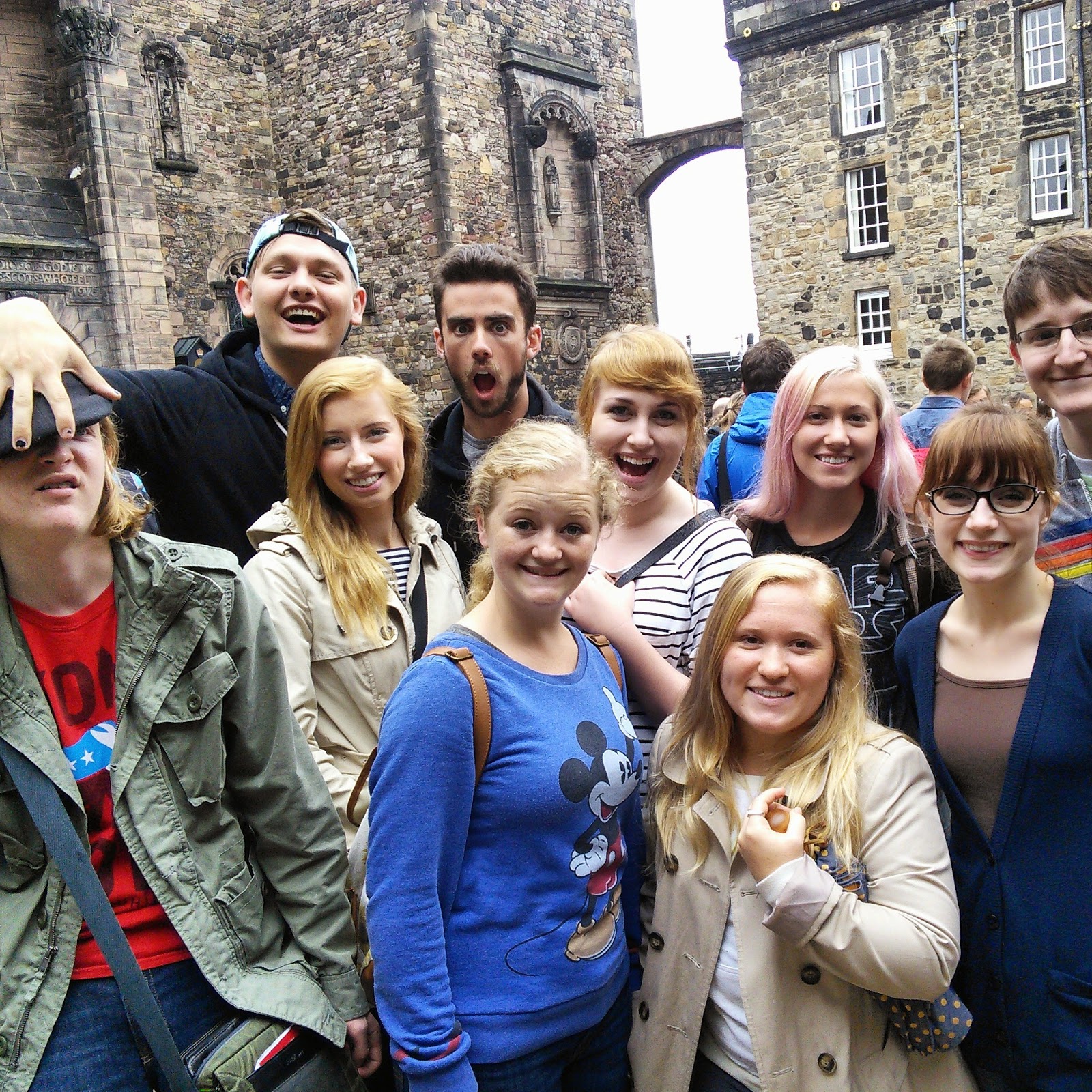 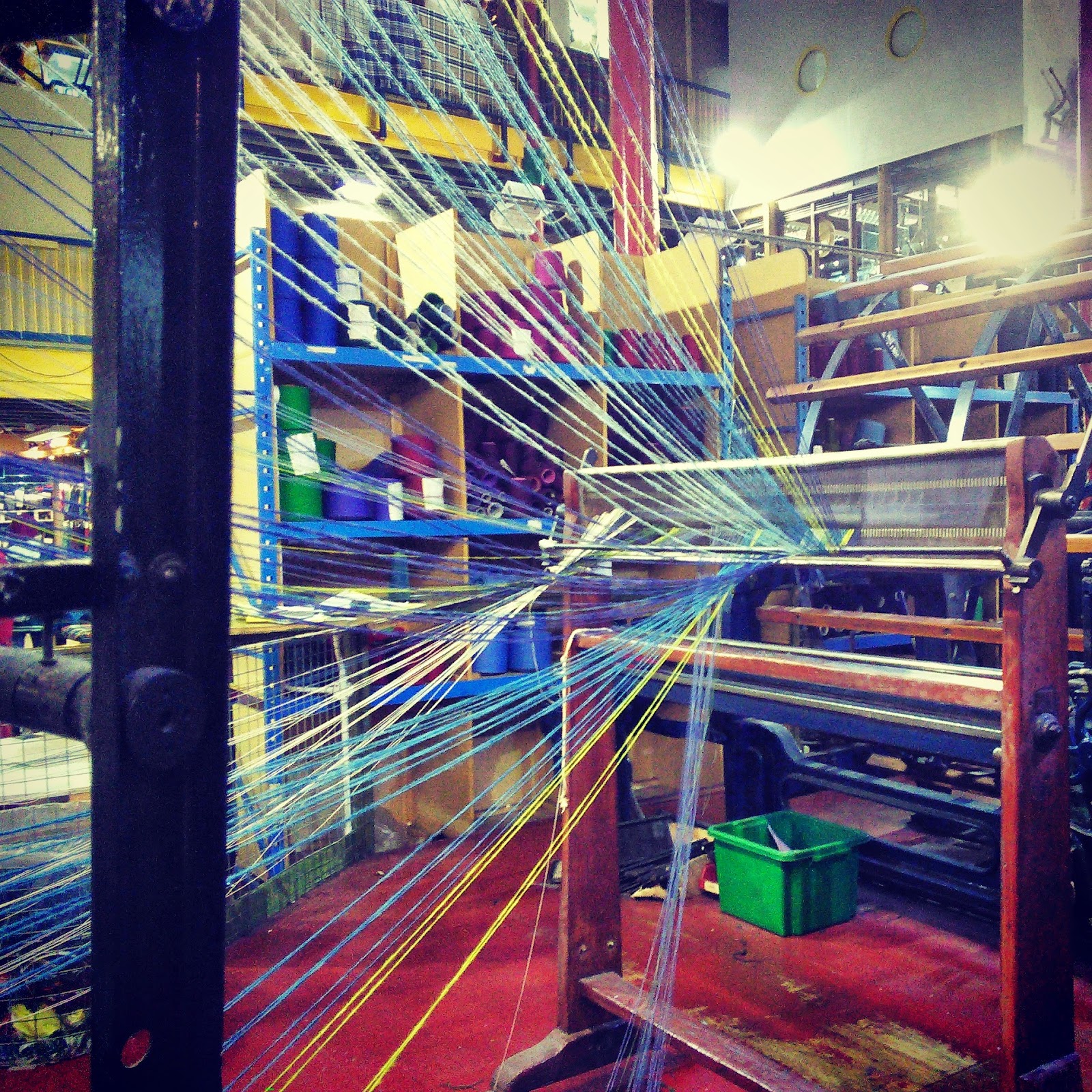 Afterwards, a handful of us visited the Edinburgh Woolen Museum, where we watched the tartans being made with some loud machines that made a constant clickety clack. There was a little shop inside called "Bagpipes Galore!" which was just a sad little one room affair with a sullen employee and little of the enthusiasm of the shop name. It became a cry throughout the day, though. "Bagpipes galore!" 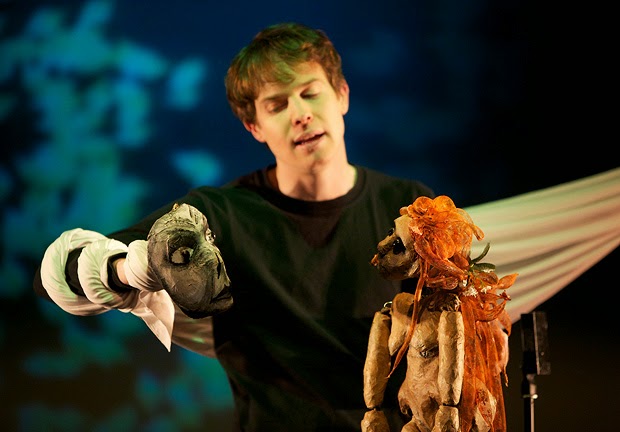 Miles and I attended an afternoon performance of Paradise Lost, a one man version of Milton's epic poem. Performed by Paul Van Dyck, a Canadian artist who used projections, puppets, and his own torso to tell the story. I was impressed by his ability to recite the entire thing - it's an hour of verse. I was also impressed by the naked Adam and Eve puppets. who were strangely expressive and eventually a little sexy (not my thing.) I enjoyed this piece; I thought I might get bored after a while, but this guy had so much energy and his usage of props, projections, and sound kept things moving. I especially liked his massive angel wings, made from draped white fabric. 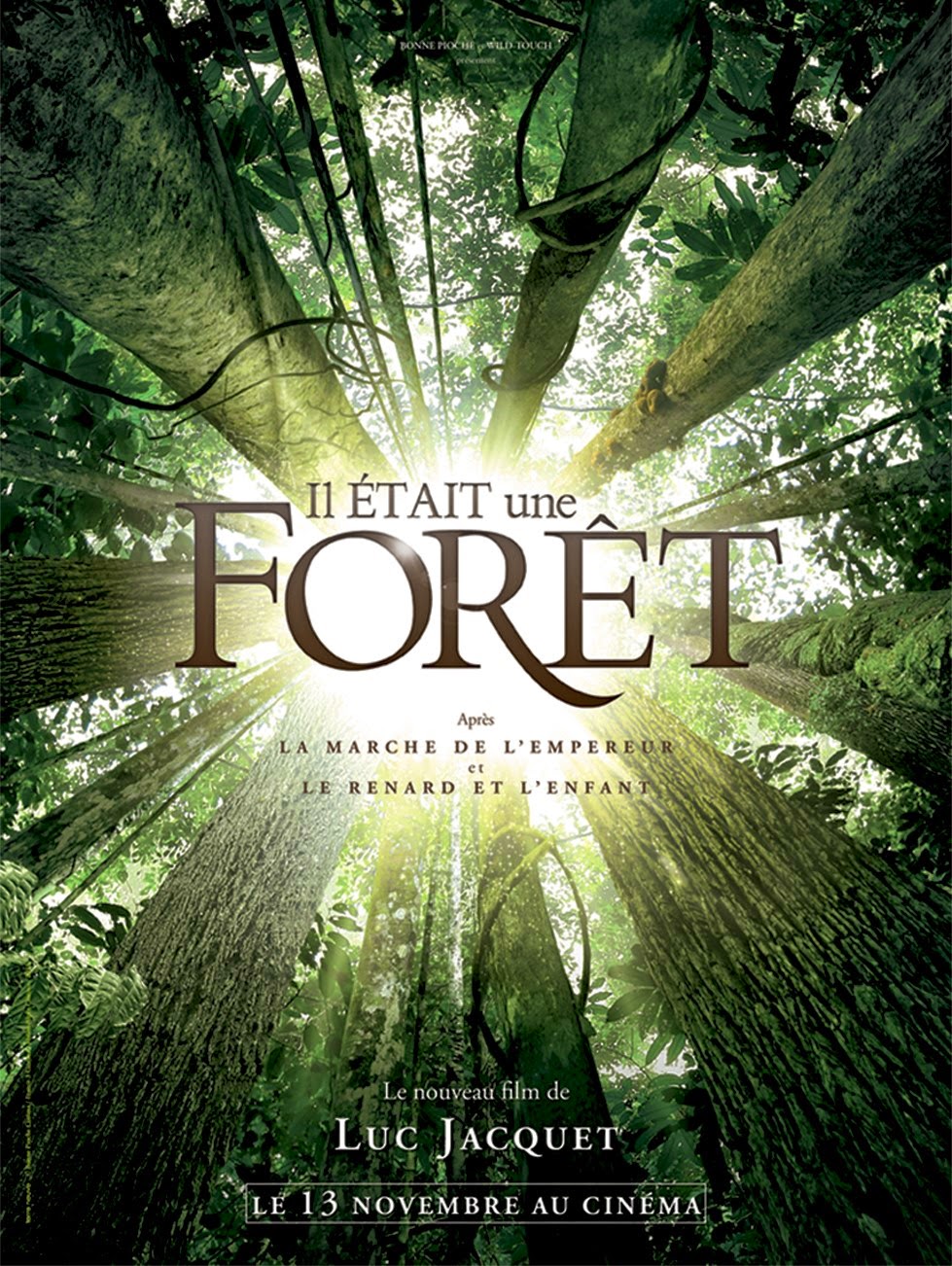 Next the guys and I went to see Once Upon a Forest, which is a new documentary from Luc Jacquet, who directed March of the Penguins. This one is about trees - just trees. In the Amazon. And I thought it was fascinating. He chronicles the amazing things that trees experience as they develop through generations and centuries of growth. They use animations and computer graphics to show what's happening inside of the bark and deep down in the roots. I thought it was beautiful and I learned a lot. Poor Miles, a noted lepidopterophobic, was traumatized by all the butterflies, though. It's a real thing with him. 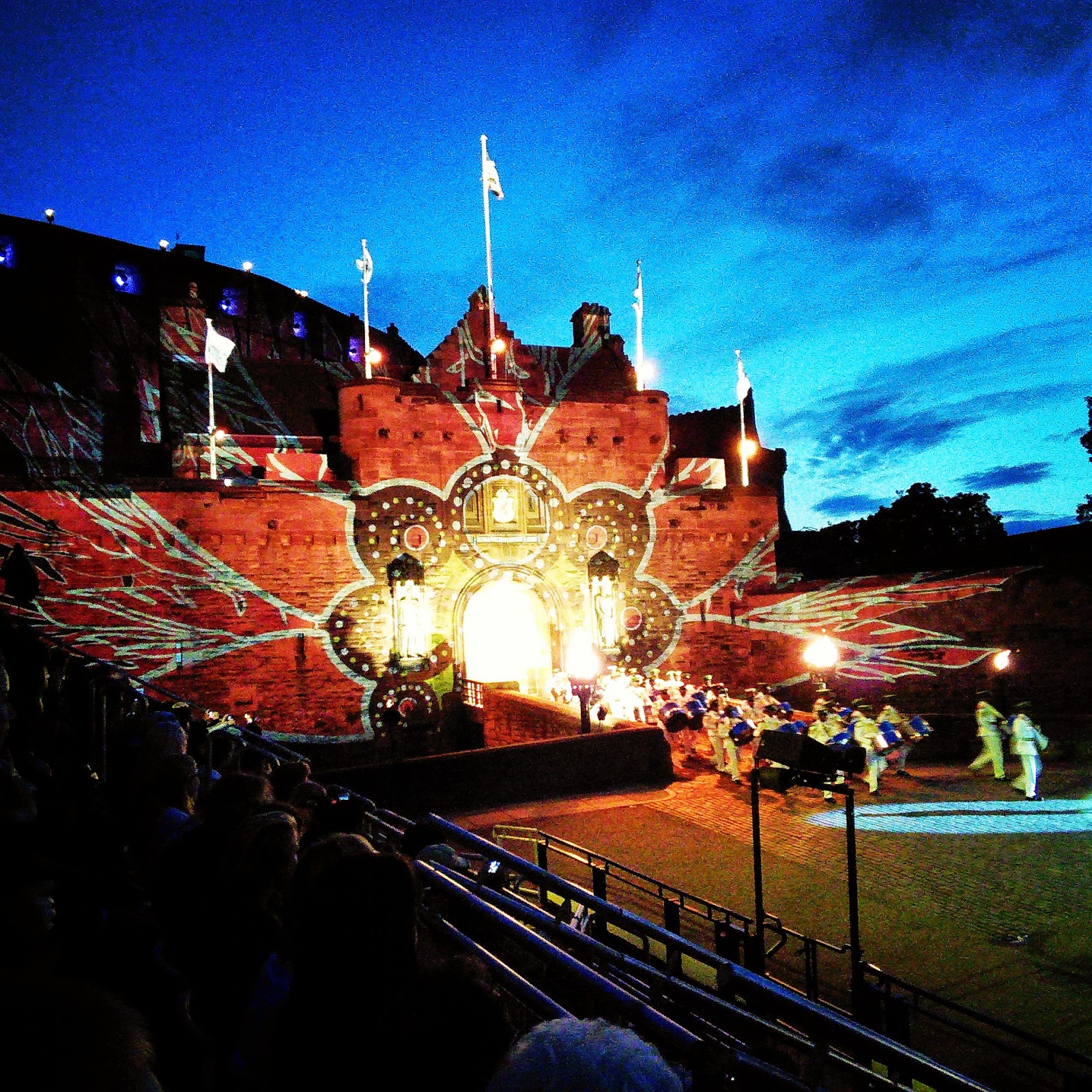 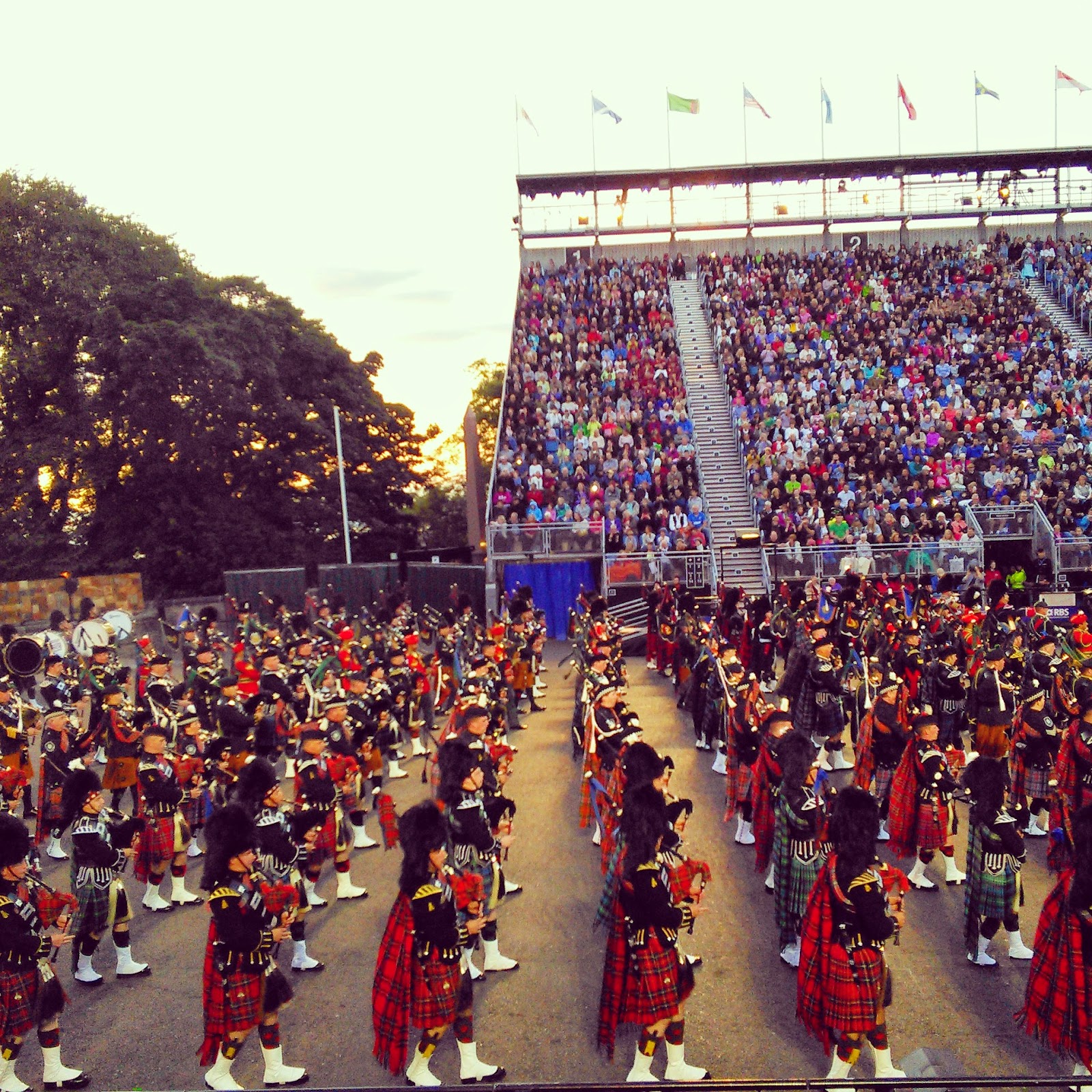 We capped the night with the Military Tattoo. I've seen it now six or seven times and I know the basic drill. But it doesn't really seem to get old. I anticipate the new countries represented each year; this year it was Australia, New Zealand, India, South Africa, and Malta. There were a few surprises: at one point a guy dressed as a giant red parrot on 6 foot stilts came out and flapped around the arena. And then, perhaps more surprising, a band of African Zulu warriors, replete with topless women, bounded around and stamped to giant drums, pausing only to do the splits. My students joked that, though I had warned them prior to London that the plays we saw might contain nudity, they had to wait until our final night to actually see some. Overall, the tattoo was rousing and fun and there's never a shortage of bagpipes. 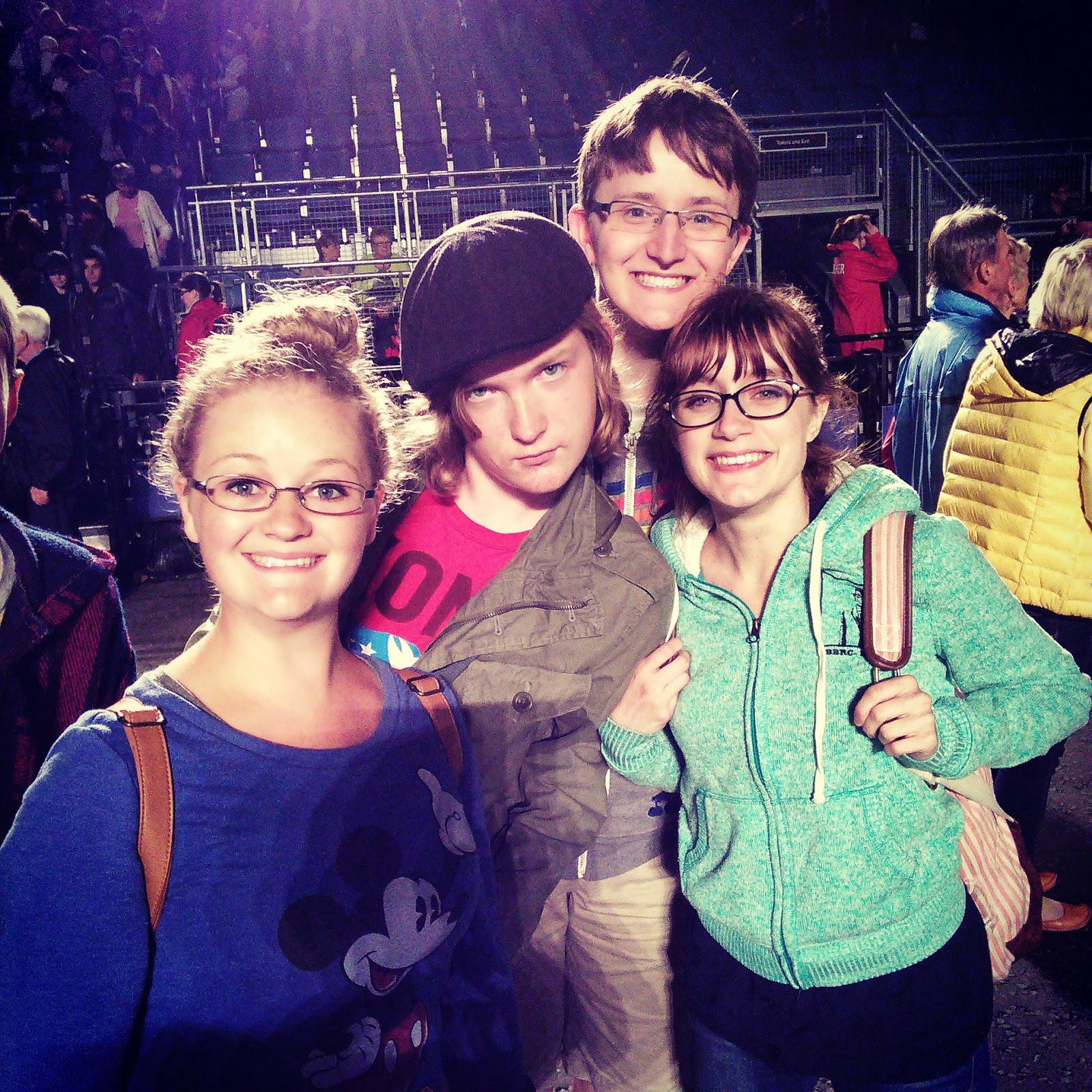 We walked along home along Prince's Street - Under the lights of the castle. Home to pack - our taxi leaves at 4:30am!


Since we're done with shows for the year, I thought a lot about everything I've seen and decided to award my 2014 London Tony's. These are called the Tophers. Here's what I would award:
﻿
Best New Play: Let the Right One In, Apollo Theatre

Best Perfomance by an Actor (Play): Graham Butler, The Curious Incident of the Dog in the Night-time

Best Direction of a Play: Declan Donnellan, Shakespeare in Love

Best Direction of a Musical: Timothy Shaeder, Porgy and Bess

Best Choreography: Steven Hoggett, Let the Right One In