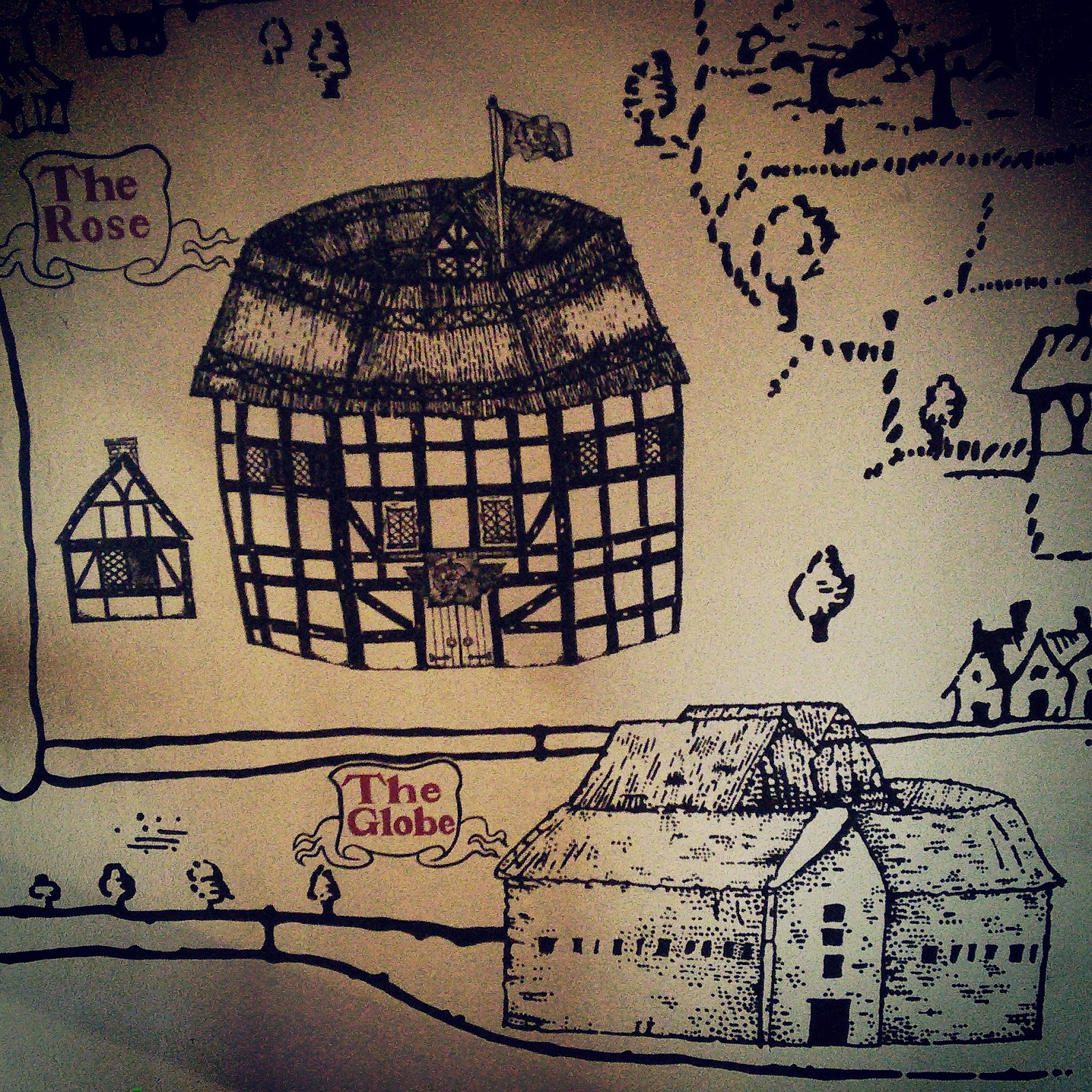 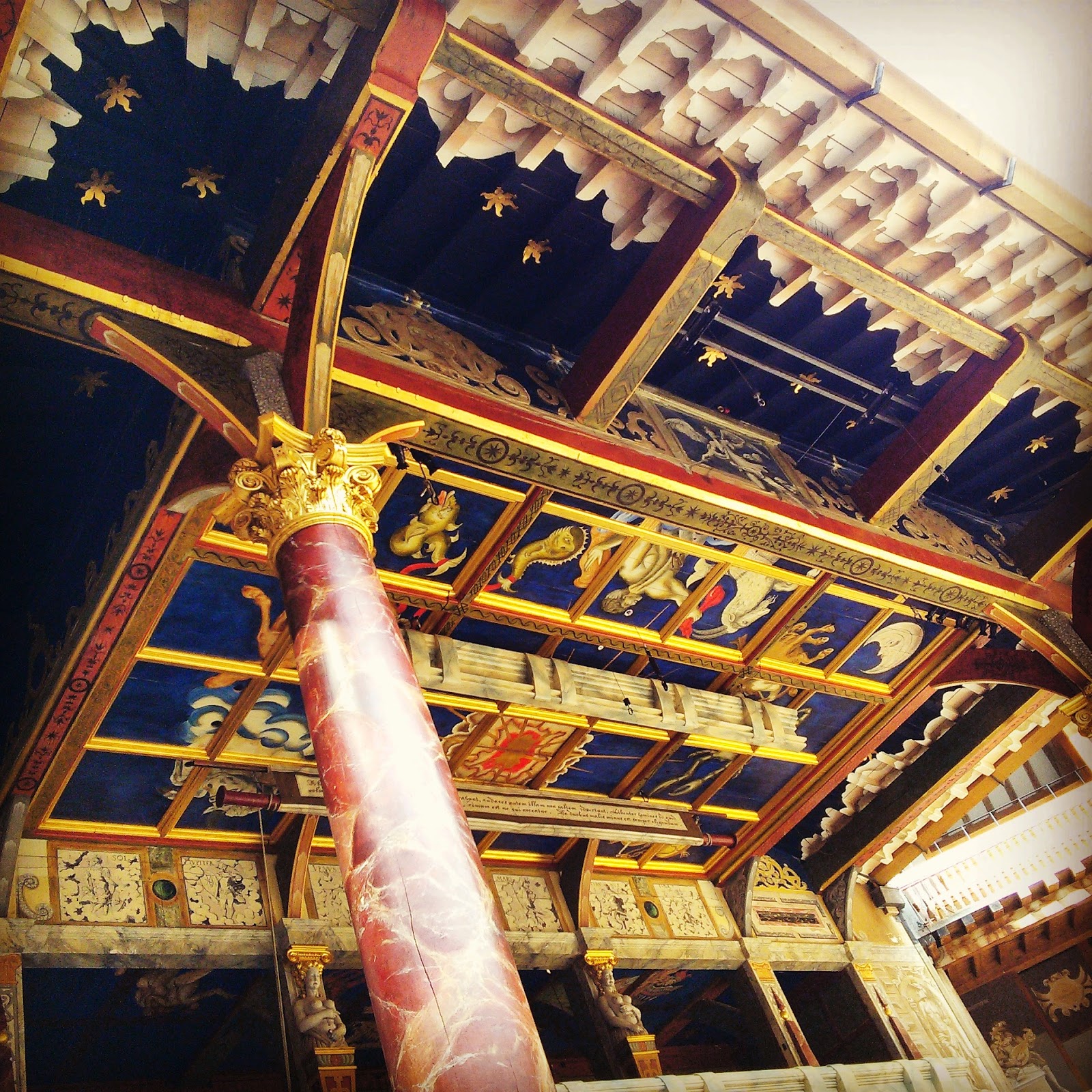 We were up early today for our Globe tour which, I found out, was kind of nice. Our tour was the first of the day so we were able to wander around the space, completely empty. The space, not us. It was so quiet in there. Just us. I wondered how it could ever be so raucous and fit so many people; 700 people stand for every show. 500 sit. Today it felt no bigger than a convenience store. 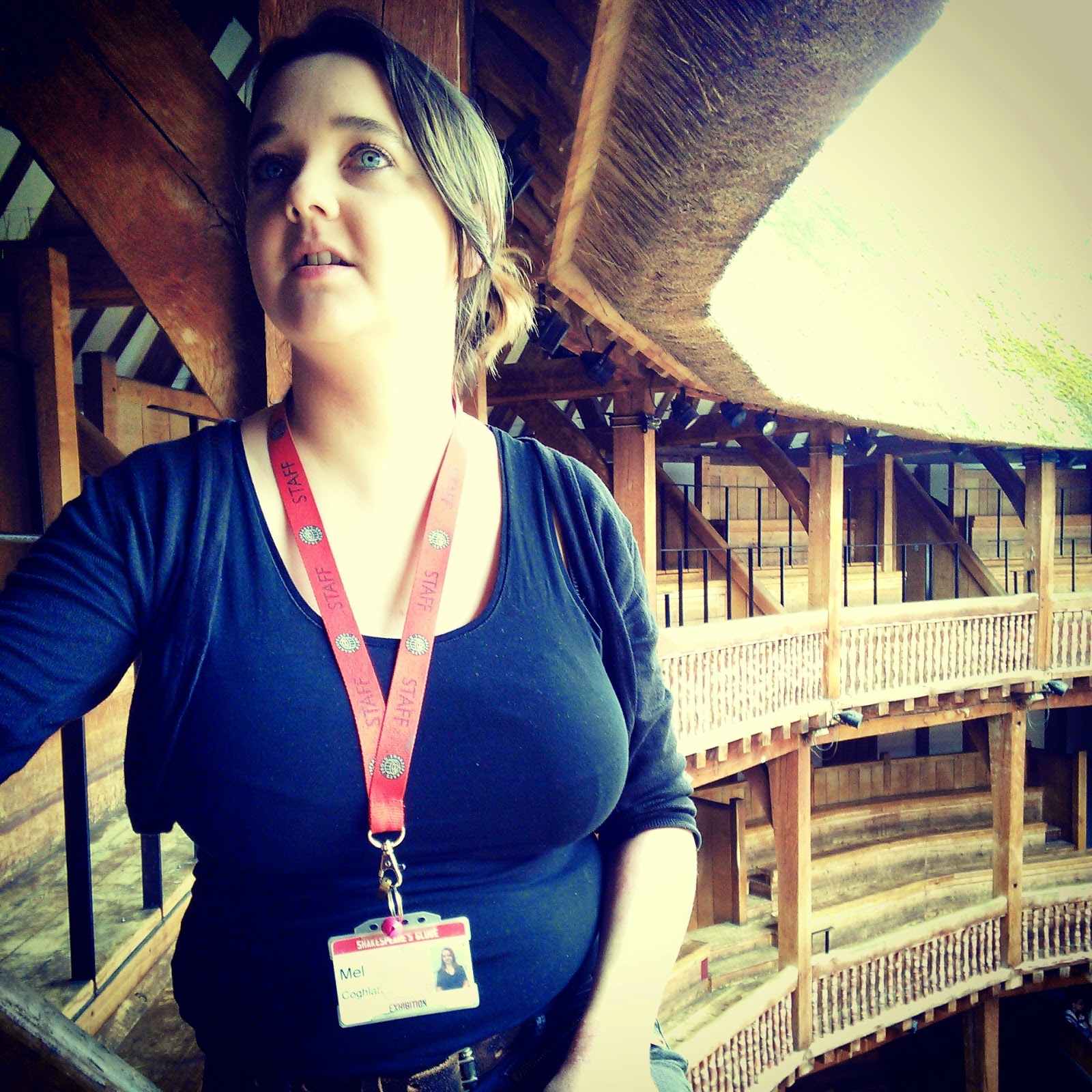 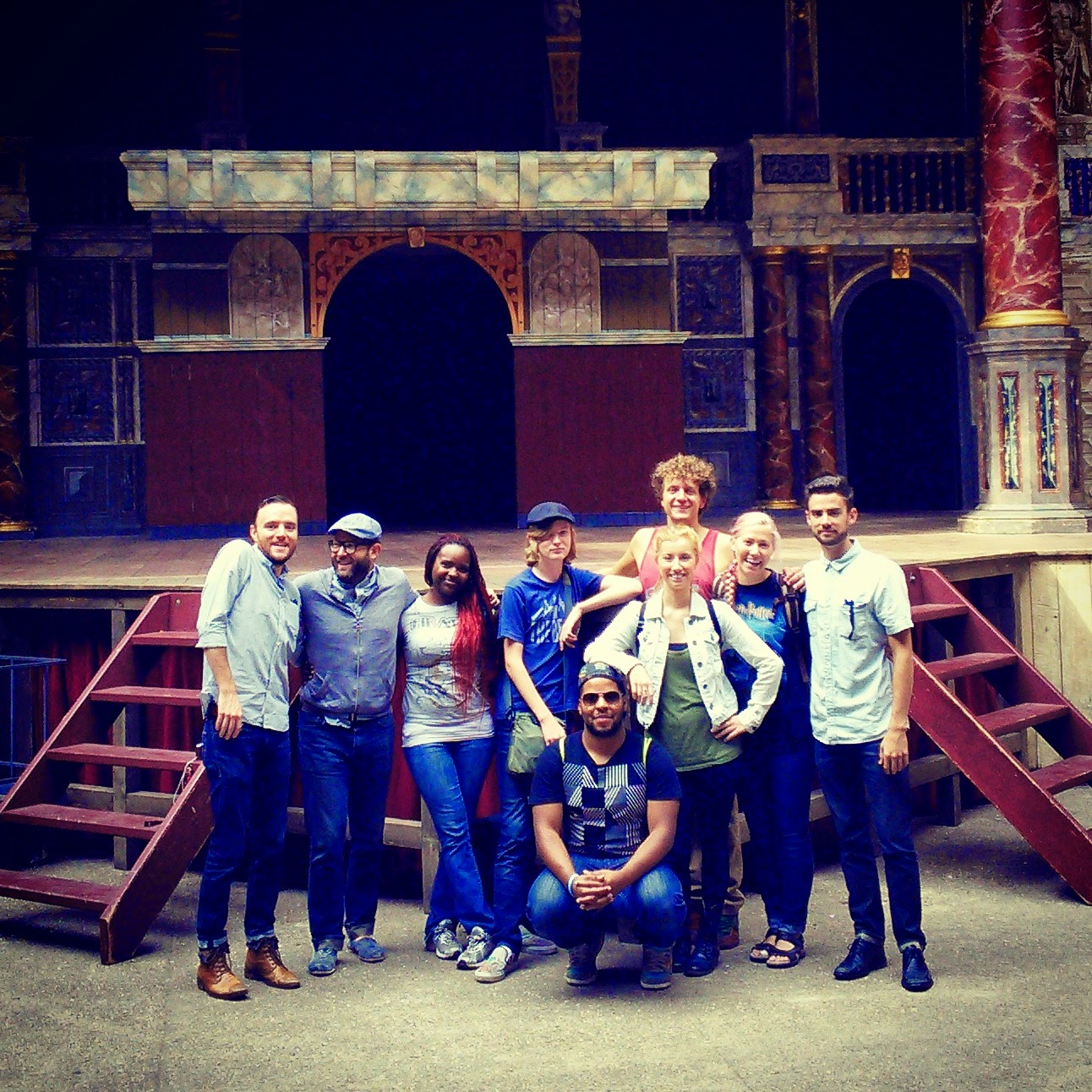 Our tour guide was a lot of fun, albeit a little bit scattered; she lost her keys in the Rose and could never find the light switch. But she certainly had energy in spades and filled her informative stops with bits of gossip and story about actors and life at the Globe today. I thought she was pretty entertaining. After the Globe she showed us the ruins of the Rose, which was fun to see in advance of Shakespeare in Love, which is set there. We're seeing it Saturday. We also looked at the original Globe site, now a parking lot, which is never very exciting. And I think that's the point. Time moves on! 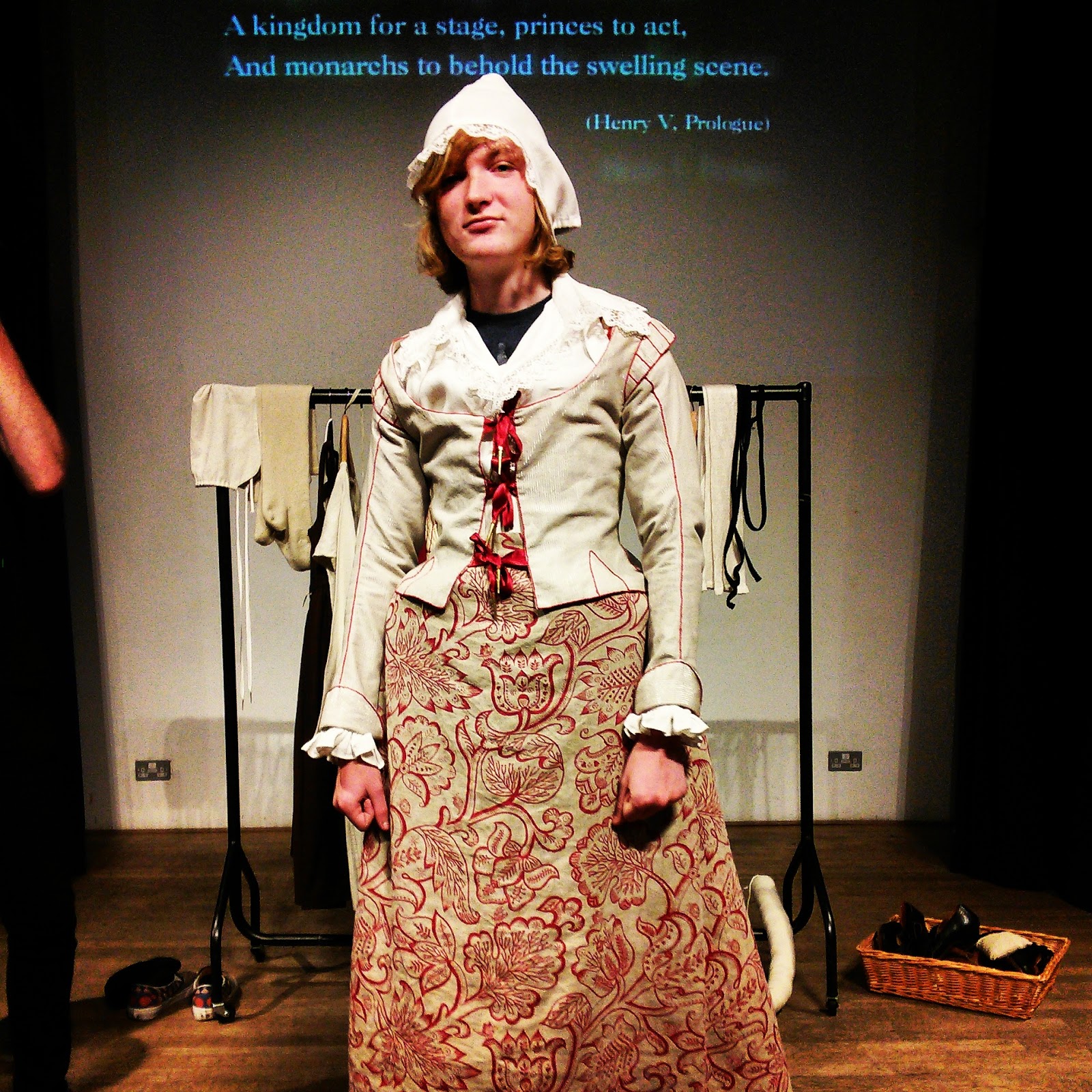 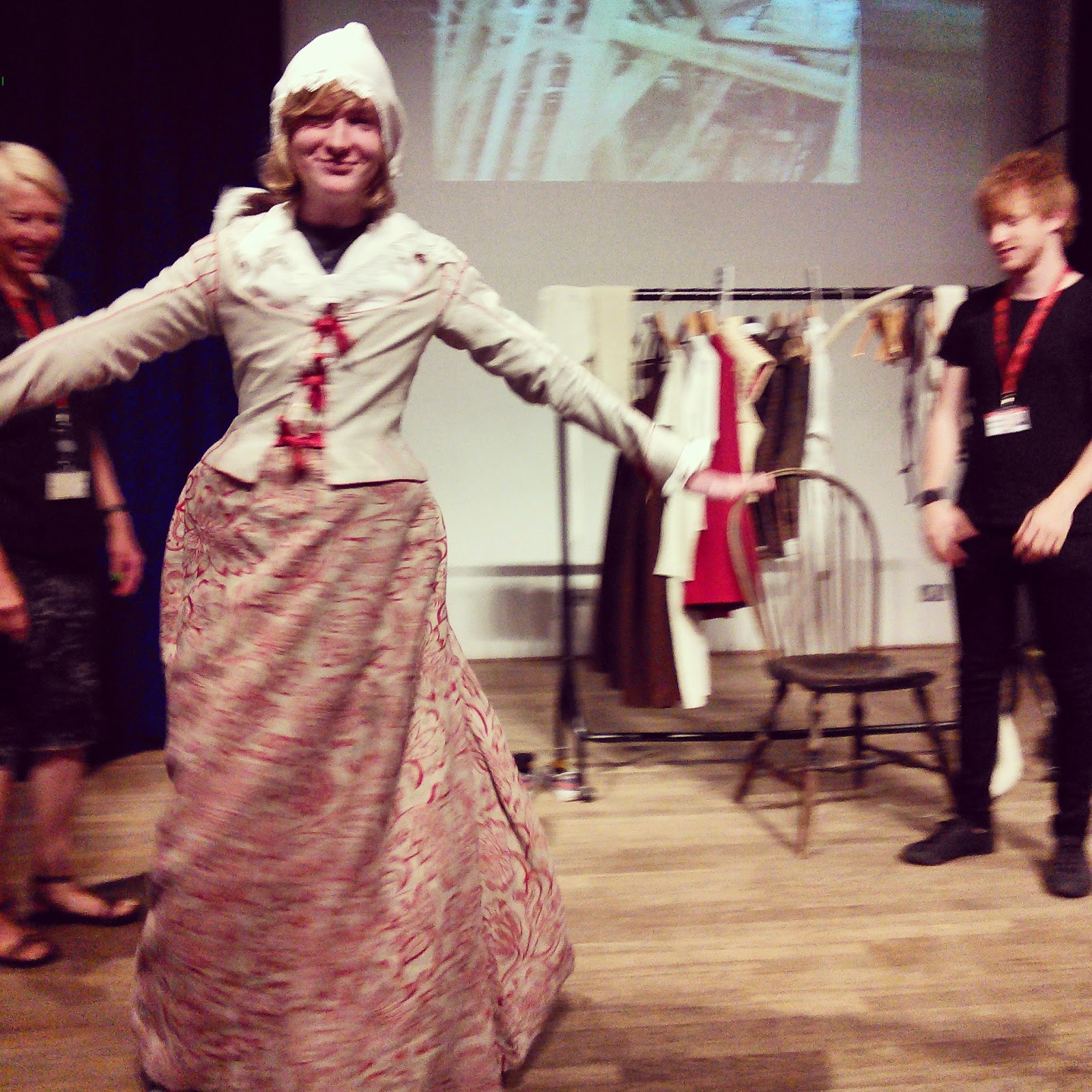 The highlight of the tour, no doubt, was the costume exhibition. Two guides from the costume department come and dress one lucky group member as Ophelia. As you can see, they chose Miles. For the record, Miles did not volunteer or want to do this. But as the original actors were boys, and as Miles was the only one thin enough to fit the dress, duty called. He was a great sport, though, at one point sashaying across the stage as in a catwalk, and doing a few choice spins. It's the hardest I've laughed in weeks. I rewarded him later with a lunch at LEON. He could have anything on the menu (chicken burger, big surprise.)

Today was the birthday of Shawn Francis Saunders. Here is he: 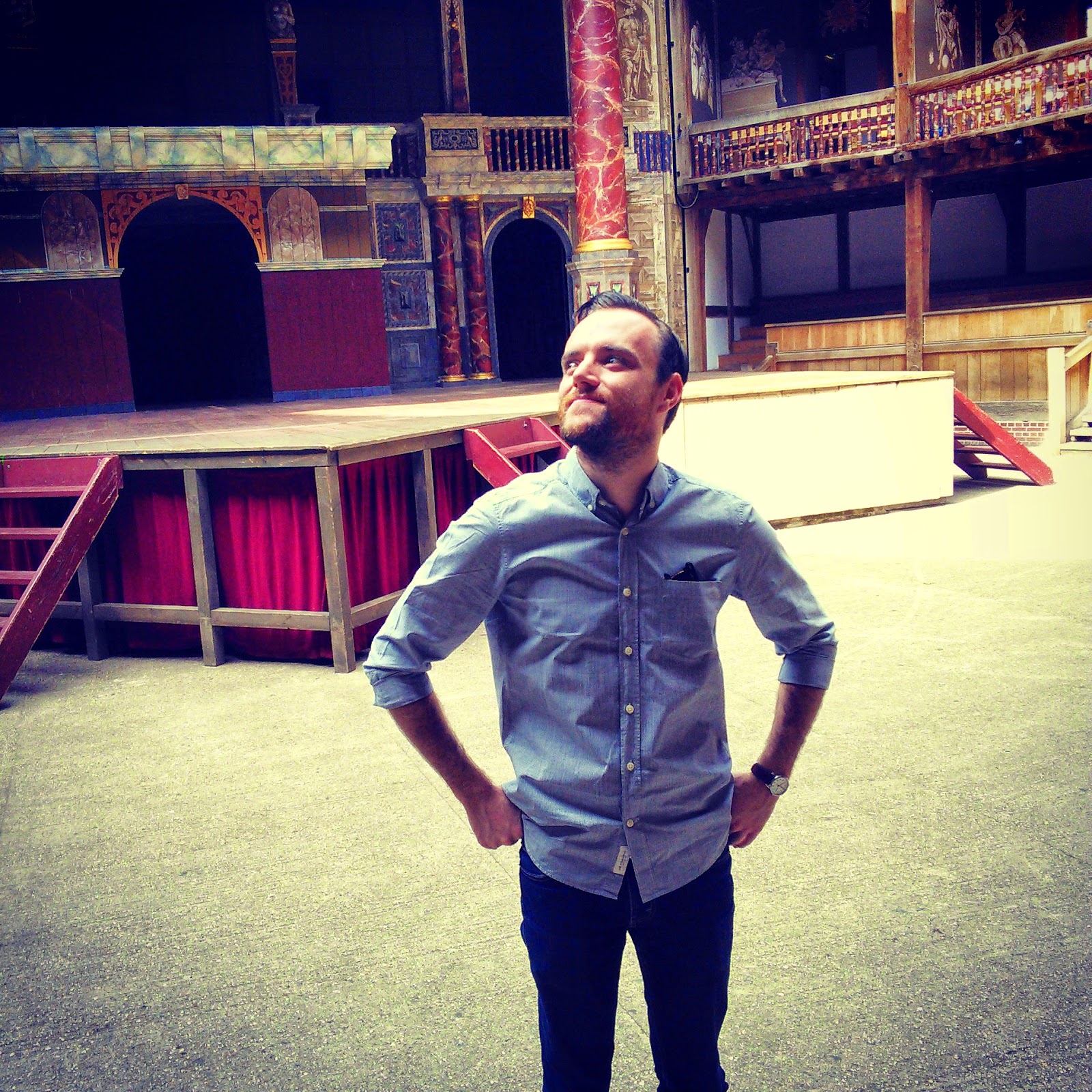 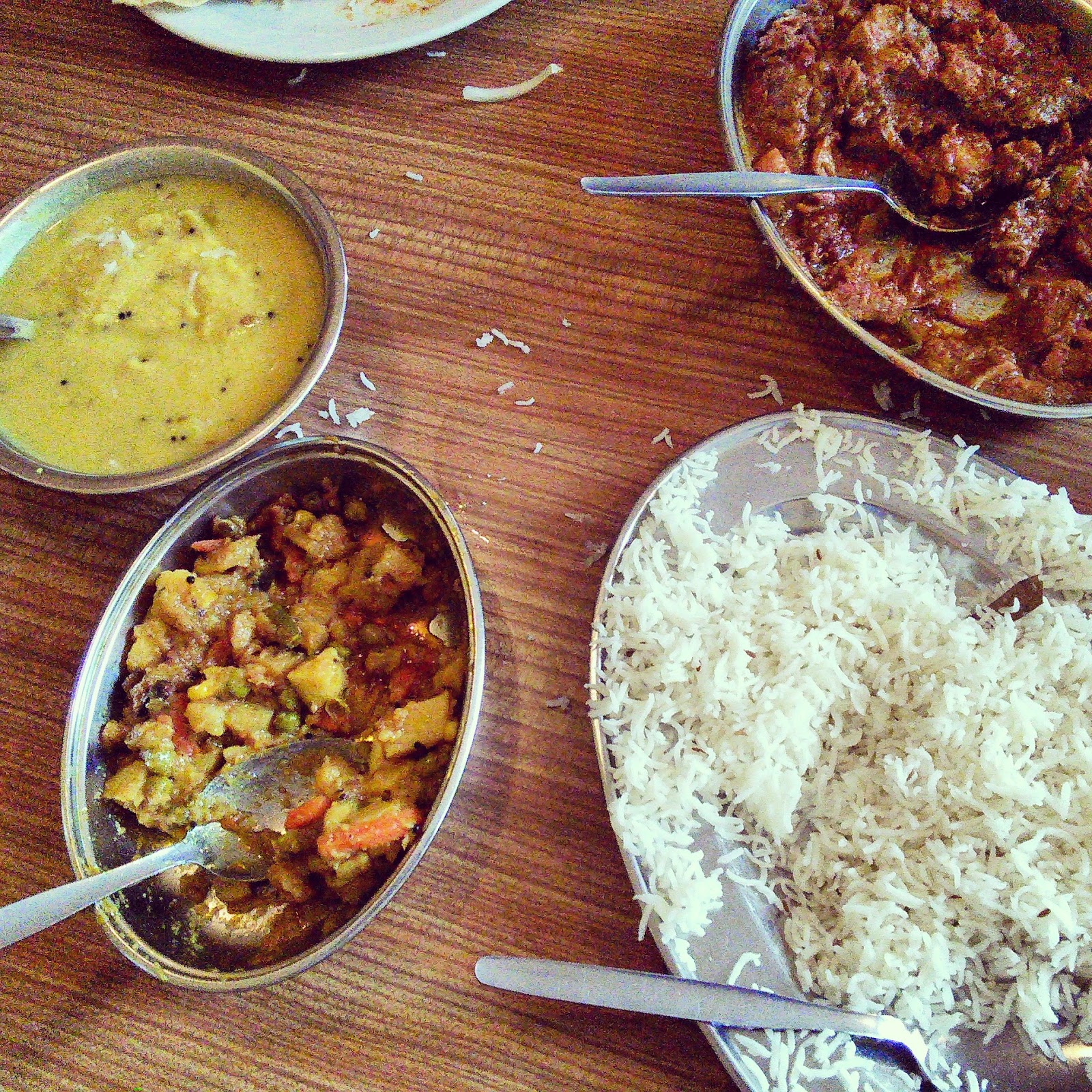 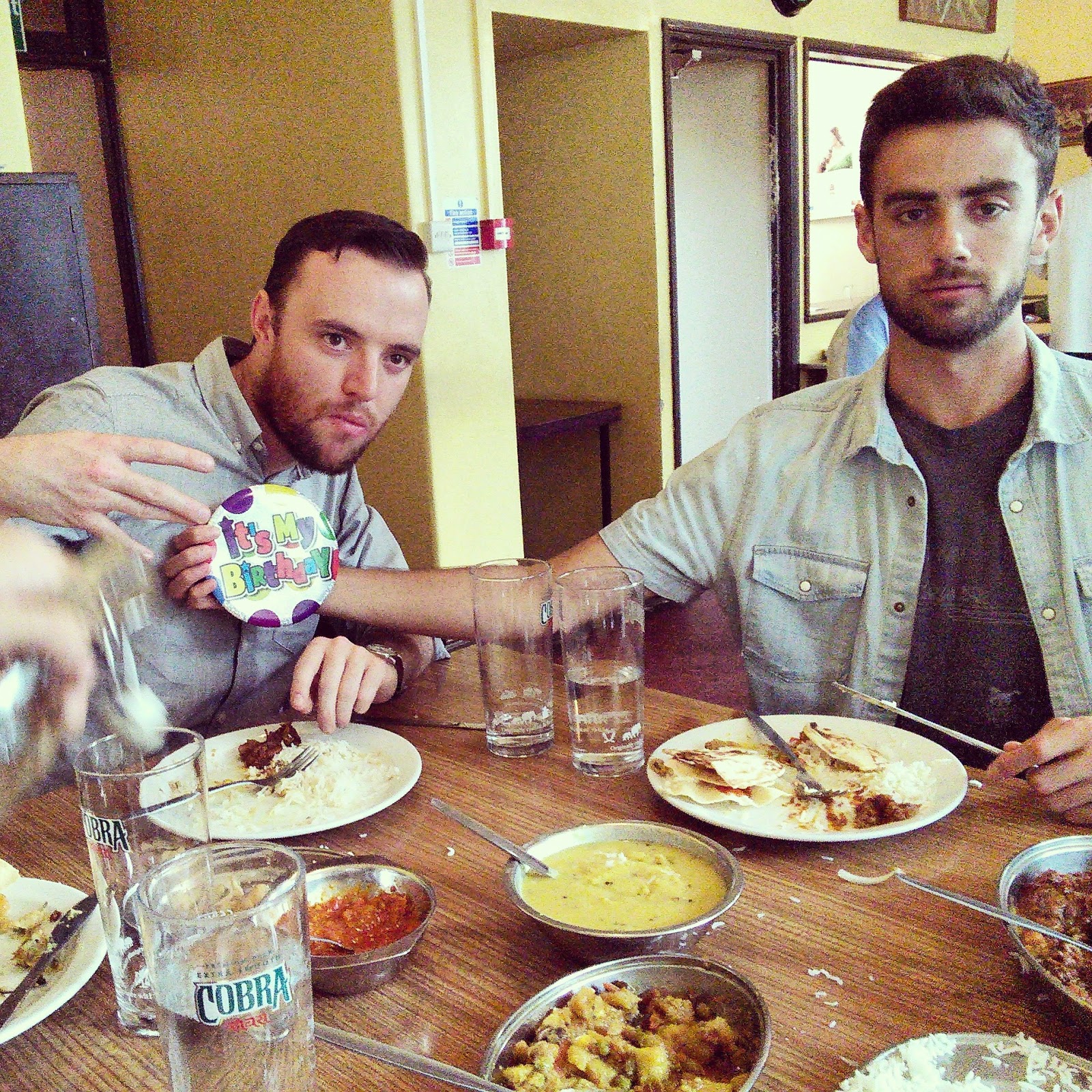 We had a birthday dinner for Shawn and a belated one for me at the India Club, where Miles and I ate a few weeks ago. Our waiter was very excited that we try a group dinner; it's one of those things where you pay as a group and the food just keeps coming out of the pantry. You don't really choose any of it. And you get things you would never try on your own; some of which is really tasty and some of which is terrifying. My mouth still burns from the deep fried peppers and the onion salad. But it was a dining adventure, to say the least, and quite funny. And I didn't leave hungry, which is the total point. 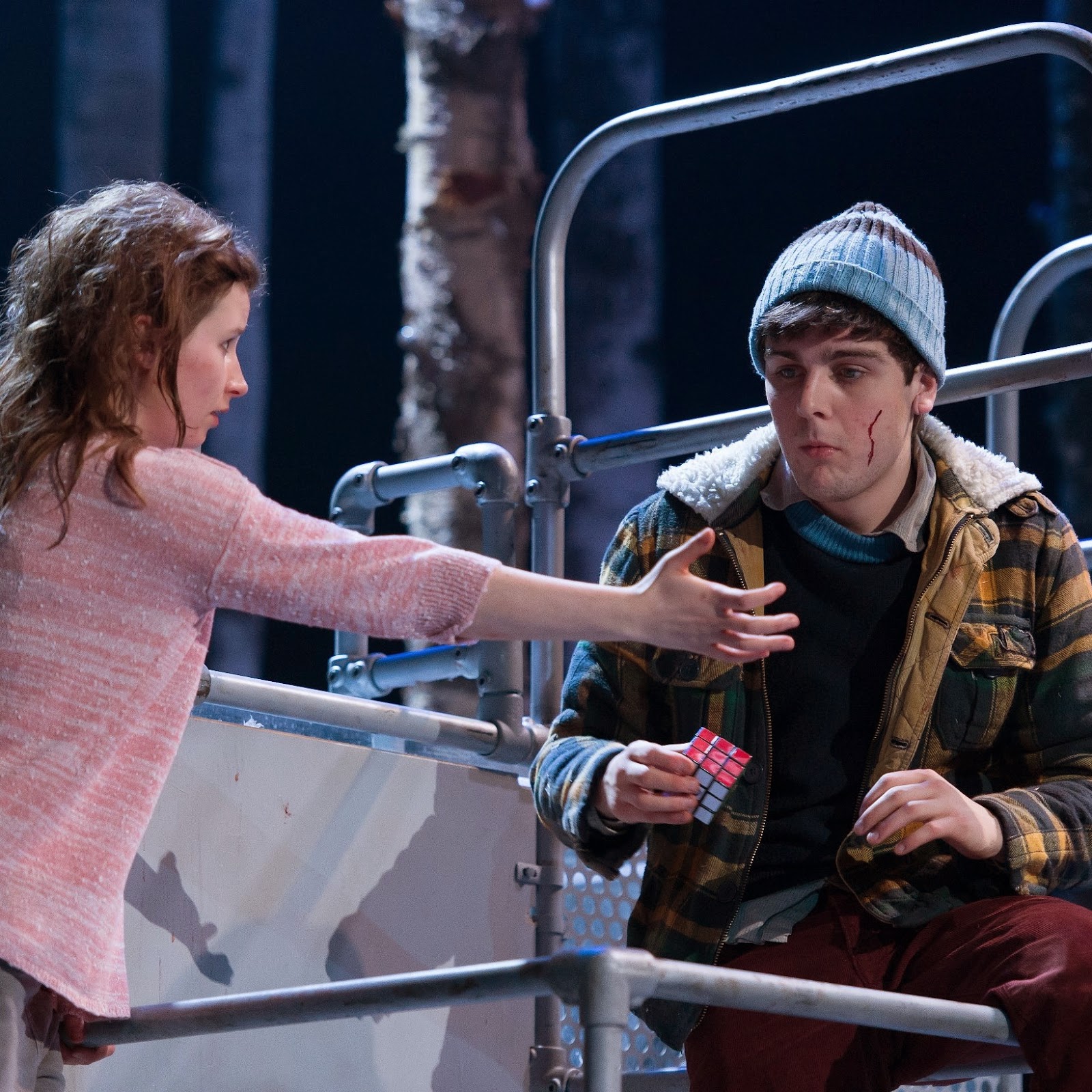 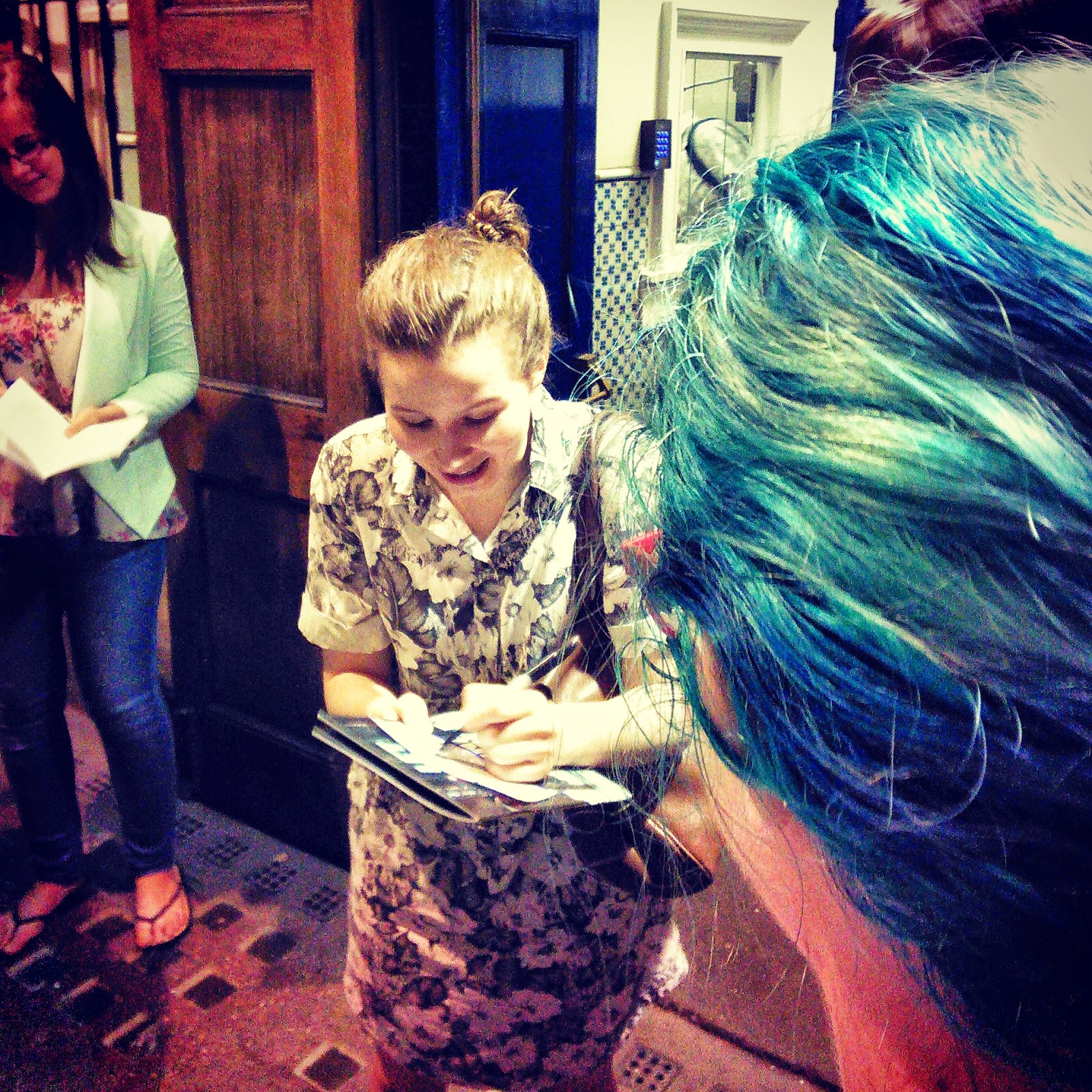 Tonight we saw the stage adaptation of Let the Right One In, which was originally a Swedish horror film and later remade in an American one. I've never seen the American one, but I have seen the original. It's essentially a vampire story: a bullied little boy makes friends with the little girl next door who, he soon discovers, lives off of blood. They become close and she protects him, all the while taking the lives of several people around him. The play perfectly captured the essence of the film, and in some ways improved it. It's warm and sweet - certainly the most touched I've been in any show this year - and suddenly, strikingly terrifying. The music is beautiful and it's filled with moments and bits of movement. Many of the deaths occur as modern dance pieces, as do scenes of montage and time passing. It was blown away by this. Came out of nowhere and left me shaking for about ten minutes when it was over.

We waited outside to say hello to Rebecca Benson, who plays the vampire. Her performance was beautiful and appropriately haunting. She was very gracious to the students, who swarmed her with praise. 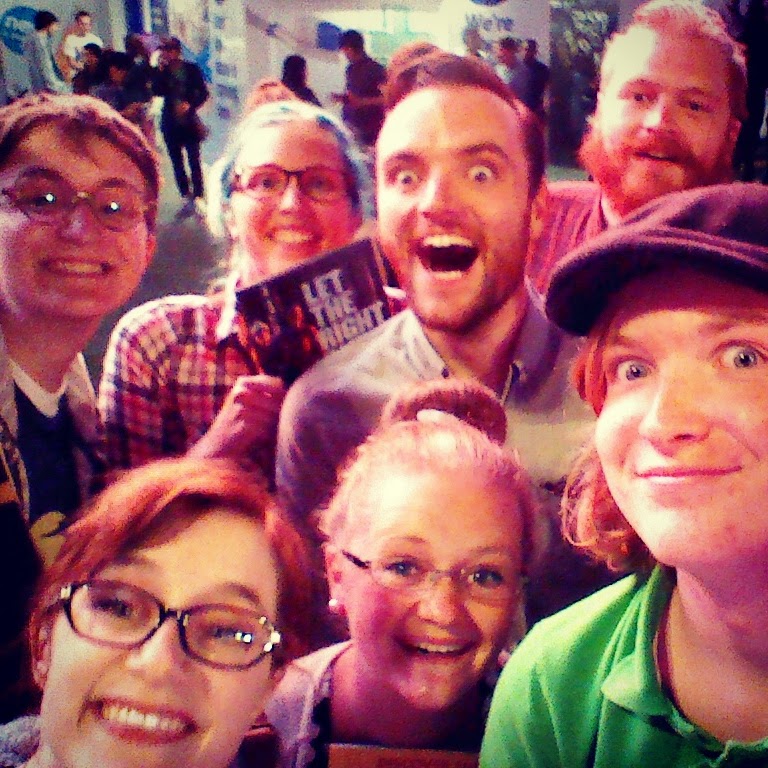